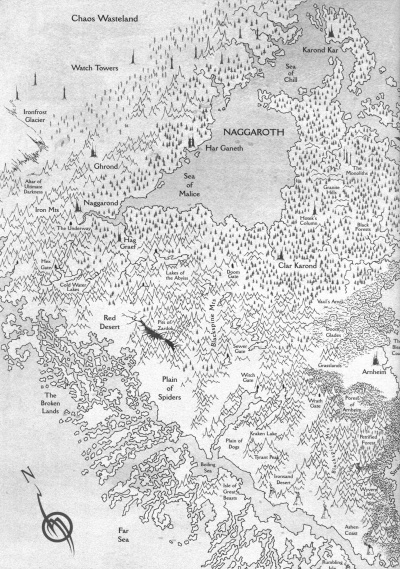 Arnheim lies on the east (centre right), south of the Dark Elf kingdom of Naggaroth. Further east is the island of Ulthuan.

Arnheim is a High Elf colony located on the Bleak Shore, the eastern coastline of the continent of Naggaroth. The colony maintains strong ties with Ulthuan, especially with Tiranoc, ancestral homeland of most of its population[1][2].

It seems to be one of the early High Elf colonies and probably founded around - 4300 IC[3].

Protected by a large garrison, the colony has endured several seaborne raids by Dark Elf Corsairs[4a][5b]. It was conquered and occupied by the Dark Elves at least once:

Arnheim's northern approaches are shielded by the Blackspine Mountains and the Doom Glades, a very large swamp. However Dark Elf scouts discovered an underground tunnel which avoids these obstacles. This enabled major Dark Elf raids in 1783 which were eventually repelled [4a][5a].

Since then Arnheim has been the victim of several raids by Shade warbands and is virtually under a constant state of siege[4b].