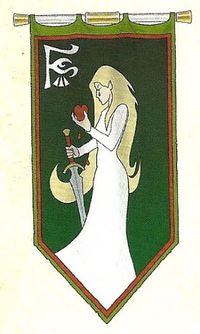 Avelorn is the homeland of the High Elf Everqueens and the spiritual heartland of Ulthuan. [1a]

The court of the Everqueen constantly travels the kingdom, a vision of laughter, singing, feasting and taking pleasure although bitter rivalries hide behind the facade of a carnaval moving through a rustic paradise.[2a]

The land is covered in lush forests and is home to many mythical creatures among which are Pegasi, Unicorns and Great Eagles. However in the foothills of the Annulii Mountains can be found Daemons whilst many many dangerous beasts prowl the forests. [1a]

Avelorn is the oldest kingdom of Ulthuan.

N'Kari then bound to Malekith opened a portal to allow a force led by General Dorian Silverblade to strike deep into the heart of the forest and attempt to capture the Everqueen herself. [5a]

The kingdom has many shrines to Isha which also provide a mustering point for citizens in times of war and whose war banner then reflect the shrine they march from. [1a] There are also dark places where the trees are dangerous and rotten and Giant Spiders lurk. [3a]

Practising archery is the duty and right of citizens of Avelorn, making them some of the finest archers in the world with veterans able to hit targets hundreds of paces away. [5a] Warriors of Avelorn tend to have floral decoration on their armour and favour green plumes. [3b]

Summer is eternal in Avelorn.