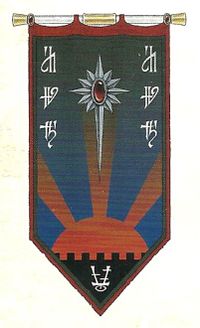 Banner of the Citadel

Its location is a site of tremendous strategic importance.

Orignally a place of power for the Old Ones and the Slann, as the Lizardmen retreated they were content to let the elves take over some of these sites.[7a]

The citadel is reportedly an impossibly tall and needle-thin structure whose foundations in fact pre-date High Elf civilisation and its main feature is its large seaport, which harbours a large High Elf fleet[6a].

It's unclear if the Citadel of Dusk is a full-fledged colony or a major military outpost. In either case it enables the High Elf navy to patrol, protect and ultimately control the western sea trade routes to Cathay and Nippon[6][1b][2b] and to suppress any raids of the Dark Elf Corsairs in this region. 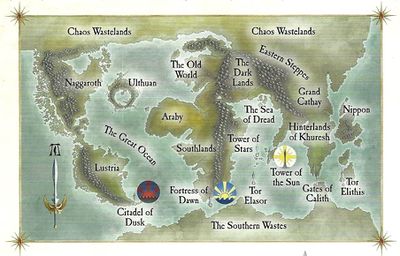 Map of the World showing the Outposts