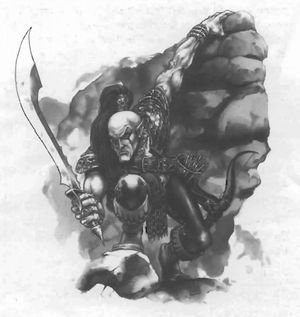 The Shades, who call themselves Autarri [1a], are the feral Dark Elves, inhabitants of the unforgiving depths of the Land of Chill.

They are currently organised into several rival clans, and the majority live in the Blackspine Mountains and are considered feral by other Dark Elves, practising strange rites, drinking fermented blood with their tents made from the skins of their prey be that beast, human, elf or orc. [7a]

Children born to the Shades are left outside the birthing tent to endure the elements for their first night of existance with the survivors being claimed and trained by the clan as scouts. [5a]

To survive, the Autarri have become almost supernatural scouts, able to silently stalk the densest forest or most treacherous canyons in the search of their prey. Their marksmanship is also superior to that of a trained Druchii crossbowman, while they can easily match the hated Shadow Warriors in the use of the blade. Foolish is the Dreadlord who doesn't include them in his army if he gets the chance; for while the Shades are happy to exchange wild beasts for the enemy soldiers, there simply aren't enough of them to satisfy the demand.[2]

They possess a deep hatred towards the High Elves, and Shade warbands launch occasional raids against Arnheim. Several clans have recently emigrated to the Shadowlands, determined to reclaim their ancestral homeland.

Their origins are unclear; according to some legends 2000 Dark Elves simply refused to establish themselves in the new cities of the newly-established kingdom of Naggaroth[1b].

Another source claims that the Shades are the descendants of a ruling family of Clar Karond who, after being overthrown, went into self-imposed exile [3]. They were said to be explorers seeking a passage to the western coast through the Underworld Sea but were ousted from power and retreated to the mountains rather than submit to be ruled by their enemies. This story creates some concern among Clar Karond's current ruling family who fear that the Shades may reclaim the city for themselves. [7a]

In WFB 3rd edition, they were called Shadows rather than Shades. [4a] Whilst in 4th Edition they are Scouts. [5a]