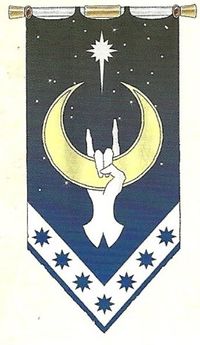 Saphery is one of the ten kingdoms of Ulthuan, and one of the Inner Kingdoms.

From the beginning of its history, Saphery has been famous for producing the mages and loremasters of Ulthuan. It is the center of learning and knowledge and holds great libraries about magic. The kingdom is located on the eastern side of the Sea of Dreams, bordering on Avelorn to the north, the Annulii mountains to the west and Eataine to the south. [2a]

It is said that all the princes and nobility of the kingdom have at least some magical ability. [1a] Each have their own isolated mansions and most are reclusive.[2a]

The banners and shields of the kindom often display symbols of Lileath, whilst mages often display the night sky on their robes, highlighting their alligience to Lileth and Morai-Heg. [1a] Only those spear regiments that guard a mage are allowed to display the image of Lileath herself on their shields. [1b]