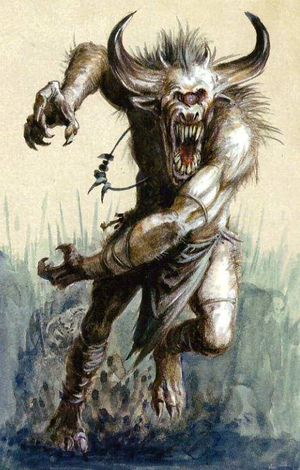 Just like a Ghorgon, a Cygor is another monster stemming from the Minotaurs. Having taken a different evolutionary path, it is somewhat weaker than the Ghorgon, as well as lacking its efficiency and monstrous metabolism. Instead, it has forfeited the Ghorgon's vision in favor of seeing swirling Winds of Chaos through its single eye. This strange perception makes them somewhat mad, but no worldly horror affects them now, as they have seen far, far worse. Its sight barely notices regular living things, who find it somewhat easy to escape the beast, which is strong but half-blind to their appearance. However, all mages shine brightly in their vision, their souls clearly highlighted by their affinity for Warpstone. The same applies to the warp-spawned Daemons, as well as the soul-powered Undead. Even magical wards glow warmly in the beasts' vision, bringing demise to their bearers, as the Cygor brings all the power associated with Giants to bear on its chosen target.[1]

Even if the enemies are too far away to be engaged in melee, the Cygor is still able to reach them. While most Beastmen shun ranged combat entirely, Cygors often use their great strength to hurl great boulders at its foes with the power and efficiency of a civilised nation's stone thrower, the sorcerous targets allowing it to home in with surprising precision. Understandably, light scouts generally employed against war machines are useless against Cygor, being more of an entertainment than any real danger.[1]

However, the Cygor can be supremely dangerous without employing any of its famed strength. At a certain range, it can interfere with the flow of Winds of Magic, whereas the already unpredictable magic becomes downright dangerous to use, usually tame combinations leading to the dreaded miscasts, taking a considerable toll amongst the enemy wizards. And finally, should the mage be skillful enough to resist, he or she might try to obliterate a Cygor with the working sorceries... only to find it stubbornly rebound the spell, completely unharmed by the process.[1]