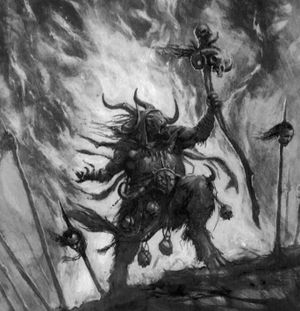 The shamans of the Beastmen race are vile to behold, their filthy bodies covered in matted fur into which all manner of crude fetishes and grim charms are woven. Their twisted features are often covered in a ragged hood and they bear heavy braystaffs as both brutal weapons and the symbol of their position in the warherd. Bray-Shamans occupy a unique niche in the brutal and bitter world of the Beastmen. They have no need to defend themselves from other members of their tribe, for none would dare assault them. Not even the mightiest Beast lord would harm a Bray-Shaman, for they speak the will of the Dark Gods, and those that defy the gods pay the highest price of all.[1]

Bray-Shamans are born into magic, and wield it with an instinctive ease. A palpable miasma of fell sorcery surrounds them, and when their wrath is roused reality itself is distorted and maimed. Tree roots twist and writhe at their passing, the undergrowth boils with unholy life and repugnant parasites scurry at their feet. It is said that the Bray-Shamans can take the form of the beasts of the wild wood, the better to spy upon Mankind. Countless are the tales of death and war presaged by visitations of evil-eyed crows, owls or foxes. Many superstitions regarding such beasts grip the hearts of men, particularly in the most far-flung townships and military outposts.[1]

As the Beast lords are the embodiment of their race's hatred for man, so the Bray-Shamans embody the loathing of his gods. To blaspheme the deities of man is to do ultimate honour to Chaos, and the Bray-Shamans enact such defilement as the greatest of their rituals. The most blessed of all are those who have counselled their chieftains to wage unending war upon the Empire, and in so doing have burned to the ground the temples of the gods of Man. To the Bray-Shamans, the ultimate act of worship is to slay Man's priests upon their own altars, to defecate upon their holy ground and to trample their sacred artefacts beneath the cloven feet of the warherd.[1]

Once the warherds are gathered into a mighty brayherd, the Bray-Shamans will lead the Beastmen in a frenzied ritual celebration, their discordant bellowing audible for many miles around. They invoke the power of the Dark Gods, and infuse the assembled herds with bestial vigour. Blood sacrifices are made and the gizzards and hearts of captives are offered to the skies as the Beastmen thrash and convulse around the herdstone. All manner of unspeakable excesses are committed before the ritual reaches its climax and the horde explodes out of the forests to ravage the lands of the Old World.[1]

When the Beastmen go to war, the Bray-Shamans wield their powers to wreak terrible devastation upon the foe, their coruscating magic transforming soldiers into hideous new forms, summoning the creatures of the forest - both large and small - to bite and rend, or driving enemy mounts to buck their riders to the ground, to gore and trample their masters.[1]