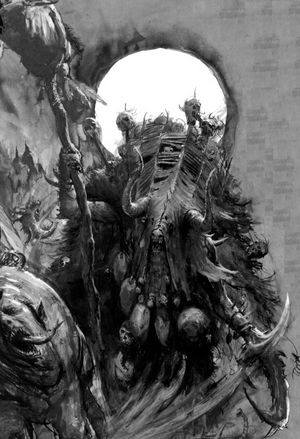 Morghur, the Master of Skulls, also known in older lore as the "Shadowgave"; by the dwarfs as the "Gor-Dum"; and by his oldest foes, the wood elves, as "Cyanathair the Corruptor", is a horrifically mutated creature, only vaguely resembling a caprine gor.

Morghur's form is constantly changing, and concealed by a heavy cloak over coarse hair woven through with screaming skulls. Only his limbs remain exposed - his right arm is humanoid, and is frequently used to carry his bray-staff, his left is a heavily muscled limb that ends in a massive hooked claw. Both of his calves are thick with black hair and end in large hooves. All four of his limbs are coated in small bony spikes.

Plagued (or perhaps blessed) with constant visions of destruction and flame, Morghur's greatest and likely only desire is to see those visions come to pass. He is therefore consumed with an all-encompassing hatred of all civilisation, law, and order.[1][2a] His thoughts however, are not particularly coherent, and can cause him to run in random directions, or wander aimlessly in circles.[2b]

Morghur was born in IC -1095[3a] in a small Bretonni tribal village on the edge of the Forest of Arden. His birth caused his mother to violently mutate as the baby ripped his way out of her. When his father attempted to strangle the babe to death, he too began to mutate, and found his hands incapable of the task. In a matter of days, Morghur's corrupting influence had turned all of the village's people and animals into mutated insane horrors while the infant himself had managed to venture into the forest.[2a]

Morghur's birth disrupted the weave of nature itself, and was felt by Ariel in Athel Loren in the south. She sent asrai scouts to find the origin of this disruption, but of those who returned, none had directly witnessed Morghur, only the corruption, mutation and madness that he had left in his wake. Ariel named this thing as Cyanathair the Corruptor and resolved to travel in spirit form to destroy the offence to nature. After several months, when she finally found the stupid, malformed creature, she thought it pitiful, and rained deadly fire magic down upon Morghur and his beastman followers then immediately returned to Athel Loren, thinking her task complete. In her haste, she failed to see Morghur's injuries quickly healing, and failed to note his recognition of what she was, and his desire to take her destructive fiery power for himself.[3b] Morghur spent more than two centuries gathering a warherd to himself, finally launching many thousands of mutants upon Athel Loren. So arrogant were the wood elves, that they failed to take the threat of the beastmen within the bounds of Athel Loren prior to this attack seriously, which only served to add to Morghur's horde when he arrived. The wild nature of the beastmen, and Morghur's corrupting influence also turned the trees and spirits of the forest against the defending asrai, particularly the dryads, causing Morghur's invasion to last for an entire year.[3c] The conflict finally ended with the Battle of Anguish in IC -811,[3d] when the ancient tree lord Coeddil picked up Morghur in his arms and Ariel drew upon the power of the very forest itself to destroy Morghur's body. Morghur, and soon after, Ariel, learned that he was immortal, having been reborn elsewhere, also, every living thing in Athel Loren touched by Morghur's blood was forever after corrupted by his taint, including, it is said, Coeddil.[3c] Morghur gathered another warherd upon his rebirth, and tracked a trail of devastation through the lands of the Bretonni tribes, towards the mountain known as the Silverspire, a site of great power, whose pure springs fed much of the lands west of Athel Loren, as well as the forest itself. In fear of Morghur's corrupting touch, Ariel dared not face him in combat again, but Orion had no such qualms, and desired vengeance against the beast that made his queen quake so.[3e] Orion's Wild Hunt smashed Morghur's forces in IC 487.[3d] Morghur was again reborn, and again headed for the Silverspire. This time, it was midwinter of IC 970 and Orion was not available to lead a host, so Morghur was instead attacked by an alliance of wood elves and Bretonni humans led by Gilles le Breton.[3d]

Morghur's attacks on the Silverspire were an attempt to devour the essence of the Lady of the Lake. He had managed to devour the essences of other divine beings but the repeated interference of the wood elves prevented him from succeeding with the Lady. Ariel only discovered these tragic deaths in IC 2008, long after the fact.[3f] She had just overcome her fear of Morghur, and had personally met him in battle in the Forest of Arden, where he was felled by an arrow in his eye fired by Sarloc.[3g]

Of course, Morghur was reborn once more in IC 2231, this time the asrai decided to find and kill him while he was still young, before he could gather a warherd, and sent an army into the Forest of Arden. So intent were they on killing the Corrupter, that they failed to notice that they were being followed by ungor scouts, who had gathered more beastmen to come to Morghur's rescue - only a handful of elves escaped the resulting ambush, and when they returned to Arden with reinforcements, Morghur had been spirited away by his new army's Bray-Shamans. when the elves learned of Morghur's return to the Forest of Arden fifteen years later, they gathered a mighty host. The forest had been warped beyond recognition - the trees picked off elves to devour, and there was evidence that it had done the same to numerous grail knights before them. Morghur was finally found, surrounded by his warherd, atop a massive herdstone in a forest glade, blackened by Morghur's corruption. Using a gourd of sap taken from the Oak of Ages, the elven general threw the liquid in Morghur's face - the pure liquid turned the Corruptor to ash where he stood, and the scene caused the beastman army to scatter.[3h]

The men of the Empire claim that it was Morghur's influence that, in ages past, made the Drakwald the dark and corrupted place that it is.[1]