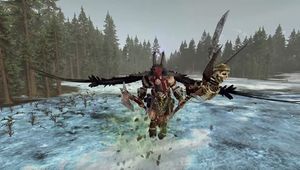 Malagor, the Dark Omen is a powerful Great Bray Shaman. [2a]

On the coldest and most desolate mornings, the citizens of the Old World creep out of their snow-shrouded dwellings to see mysterious cloven footprints that walk up to their doors, atop their buildings, and even through the walls of their homesteads. Omens of disaster crop up everywhere; milk turns to blood, calves are born with two heads, and the clouds above form horned and leering skulls. On days such as these there rises a great wailing, for these are the signs of Malagor himself, and where the Crowfather treads, utter mayhem and destruction is not far behind.[1]

The Beastmen believe that Malagor is the doom of Mankind personified. He is a figure of nightmare across the entire Great Forest, revered by the Beastmen but feared above all by superstitious men. To man, Malagor is a harbinger of the downfall of all they hold dear. Vilified by the cult of Sigmar as the epitome of sin due to his many blasphemies, a sighting of Malagor is the most terrifying portent of all. He is the winged fiend that will rise from the benighted forests and challenge the gods of Man. He is the devil rendered in woodcut in ancient tomes kept under lock and key lest the terrible secrets within blast the sanity of any who read them.[1]

From the moment of his birth, it was obvious that Malagor was blessed by the Dark Gods, for he was possessed of a pair of feathered pinions as black as the night. Though Malagor is a Bray-Shaman, he does not reserve his counsel to any single chieftain. Instead, his whisperings steer the course of the entire Beastman race, visiting the herdstones and Chaos shrines across the Great Forest and enacting rituals so blasphemous that even the other Bray-Shamans dare not voice them.[1]

When the Beastmen rise up and invade the lands of Men with Malagor at their head, the temples are torn down and put to flame. Malagor desires nothing less than to cast down the human gods and goddesses, to slaughter their priests and priestesses upon their own altars, to devour their flesh and drink their blood in vile mockery of their most holy sacraments.[1]

To the enemies of the Beastmen, the sight of Malagor swooping from the smoke-wreathed skies amongst countless thousands of carrion birds is a portent of terrible and immediate disaster. The presence of Malagor has caused stout defenders to abandon otherwise impregnable walls and the mightiest of warriors to fall to their knees in the mud in abject defeat. [1]

He can use the Following Lores of Magic: