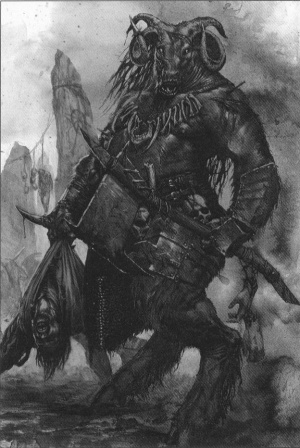 Gors are some of the most common Beastmen, who form the bulk of their warherds. They represent an unholy union between man and beast, having human torsos and arms, but distinctly animal heads and legs. The latter can be either bovine (Bovigors) or caprine (Caprigors). This is more of an academic distinction, however, as both possess powerful wolfish fangs, heavy horns and thick beastly hides, allowing them to rival the resilience of the stoic Dwarfs or the degraded Ghouls. The latter helps to make up for the complete lack of armour, as Beastmen do not forge anything of their own and the metal they scavenge is usually hammered into weapons. While some Gors use wooden shields for some additional protection, it is much more common to see them fight with a pair of crude blades. This style certainly fits their Chaotic origins, which grant them the efficiency rivalling the ruthless training of Marauders.[1][2]

When the Gors go to war, the do so banding in large herds, able to cover large tracts of land with alarming, Elven-like speed, due to their hooved legs. These wild creatures advance at the enemies without a semblance of discipline of organisation, the Foe-renders (powerful Gors in charge of the herd) just pointing them where to go, all while braying, bawling and the like... at most times. Quite often, the herd's mood locks into the state of pure and unfettered rage, free from any inhibitions they might have had possessed before and intent to murder all that stands against them. Sometimes, they might even lose all their caution or sanity and just run at any enemy they encounter, intent to slaughter them all, no matter the implications.[1]

However, Gors are much more than just brutal rage: they also possess deep animal cunning. It is in no way unusual for the enemy regiment to face their herd in combat, only to have another, just as large, turn up behind them and attack in unison, surrounding the surprised soldiers and slaughtering them all. Of course, this perfect result is in no way guaranteed, as Beastmen track their prey by scent, and the outcome is thus completely reliant on its strength and their tracking capabilities. It is very common for the herd to only turn up in the general whereabouts of their quarry, or wait in indecision for the scent to become clearer. At times, they might even lose it completely and grudgingly come back, hoping for better luck on the battlefield. After all, if it all goes wrong, Gors have no qualms about escaping to the wild whence they came, plotting for a another blow to the civilisation.[1]

A particularly fearsome Gor will often become a Bestigor, mighty campions within their warherd.

As creatures of Chaos, however, the Beastmen display almost infinite variation in their twisted anatomies. Some have the horns or head of cattle rather than goats, while others possess antlers, serrated blades or even stranger mutations sprouting from their heads. It is not unknown for Beastmen to have the head of a sheep, horse or insect, extra limbs, eye stalks, lashing tails, or any other conceivable alteration of the humanoid form. Amongst a society so wholly Chaotic, the line between mutant and Chaos Spawn is fine yet often crossed.

Gors usually worship the Chaos gods. However some of them worship one of the four major gods specifically. Gors that devote themselves to a single patron God accquire mutations which eventually shape them into the favoured symbols of their patrons. These marks mostly affect Bestigors.[3]