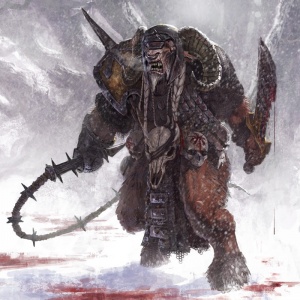 Possessing a ruthless cunning far above that of his bestial kin, Khazrak the One-Eye is the most dangerous and powerful Beastlord in the Drakwald.[1][3a]

Khazrak has plagued the Drakwald region for several years, descending without warning and then slipping away into the shadows once more. Khazrak has a unique ability to control and harness the unruly spirit of the herd and devise simple but effective battle plans. He is unlike most Beastmen, with a patient and cunning mind at odds with the normal headstrong nature of his kind. Khazrak's warband roams the Drakwald, terrorising the townships and roads, and never before has a Beastman leader proven so elusive to retribution. No one is spared in Khazrak's attacks, his superbly trained Warhounds chasing down the few who manage to escape the warherd itself.[1]

On several occasions the Elector Count Boris Todbringer of Middenheim has led the hunt to catch Khazrak, and once even managed to trap the Beastman near the village of Elsterweld against all the odds. Khazrak lost his eye to the Count's Runefang in the ensuing battle but still escaped. Khazrak's eye has never fully healed, and continually weeps blood and pus. Such a handicap would usually prove fatal in the brutal culture of the Beastmen but Khazrak's wound has actually made him all the more fearsome. [1][2a]

For many months afterwards he plotted and schemed in his hidden lair, and only when the perfect opportunity presented itself did he put his plan into action. With a series of daring ambushes, he lured the Count and his army into a cunning trap. Khazrak confronted the Elector Count and threw him from his horse, pinning him to the ground. With slow deliberation, Khazrak gouged out one of the Count's eyes with the tip of a horn. Khazrak allowed his foe to live, and some believe that he actually enjoys matching his wits against Todbringer, seeing it as a challenge to his skills.[1][2a]

The Elector has posted a bounty of ten thousand gold crowns for Khazrak's head, but those few mercenary armies who have returned from the Drakwald have done so empty-handed. The two rivals have clashed on several occasions since. Khazrak remains a dire threat to the entire north of the Empire, and his invasions are covering a wider area with each passing year, as more and more towns, forts and castles fall victim to his well-planned and devastating attacks.[1][2a]

Eventually the aging Khazrak is defeated in a duel by Todbringer who, seeing that the End Times had come, had left his city in the hands of Valten, the Herald of Sigmar. Todbringer finally slayed his hated opponent, before being swiftly ripped apart by the Beastlord's hordes.

He is famed for his skill in raising and training Chaos Hounds and is accompanied by the massive and savage Redmaw in battle. The pack has torn apart cattle and farmsteads alike near Middenheim and even coach's have been attacked, the people and horses slain and fed to the hounds, valuables and weapons taken to be offered at the Herdstone . [2a][3a]