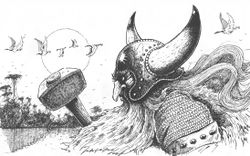 Sven Hasselfriesian was a Dwarf Engineer who, along with Burlok Damminson, managed to destroy the Engineers Guild of Karaz-a-Karak in 2350 (Imperial Calender) while performing tests on high pressure vessels.

Sven Hasselfriesian was a Dwarf who emigrated to Lustria after being expelled from the Engineers Guild. During his time working with the Guild, he had become interested in the construction of steam or alcohol powered engines, and was one day struck with the idea of building a boat powered by such an engine. The notoriously traditionalist Guild was opposed to his idea, but Sven persisted, until the Guild finally forced Sven to undergo a ritual of humiliation after which he was expelled. [1a]

He set out from Barak Varr in 2355 IC in his ship and finally reaching the Tarantula Coast having fought off a number of attacks from creatures of the deep. [2a]

In Lustria he established himself as a blacksmith at the trading port of Iquitos on the Amoco river. Sven made a good living and was able to set about realising his ambition. After three years of work, the engine was finally nearly completed, and Sven employed Norse craftsmen from the port to construct the hull. [1a]

When it was completed, Sven named it the Voltsvagn after his mother. Since then Sven has become captain of the boat and has become successful ferrying passengers and freight up and down the great Amoco river and its tributaries. Sven has been involved in numerous skirmishes against the Slann, and is by now completely immune to their poisons. [1a]

One evening as he was getting drunk with Juggo Joriksonn in the Packet Inn he was approached by Haarld Havangatt from the village of Vastervik on the Ljunger River who was seeking aid against Slaan raiders. Bored, drunk and seeking adventure Sven agreed to aid them and set about gathering a small group of fighters, but discovers most sell swords have already departed. He enlists some old friends, a group of Norse Beserkers and a Sea Elf archer on holiday and they set off for the village. [1a]

Later, the character was used in Warhammer Armies: Dogs of War for a would be-conqueror attempting to get the hoards of gold hidden in the jungles of Lustria.Needs Citation