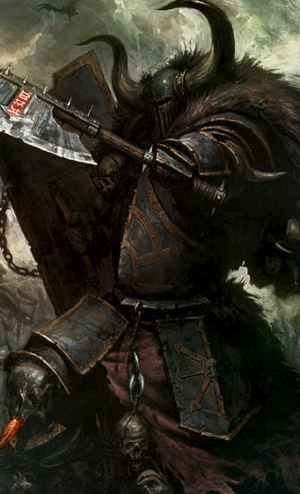 Chaos Warriors are mortals who have left their natural way of life and chosen to dedicate themselves to a Chaos God, in order to gain their favour and blessings with the ultimate goal of daemonhood and eternal life. Amongst the Northmen some warriors feel the power of Chaos greater than others. These warriors are made the pawns of the Chaos gods. The Warriors of Chaos are the best of the fighters of the Northmen, their abilities honed from constant battle within their own ranks and battle with opposing forces. They are held in honour and fear amongst the Northmen, due to their strong connection with the gods of Chaos.[1a]

The ranks of Chaos Warriors also include those from other lands such as refugees, deposed/disgraced nobles and young fortune hunters.[2] The harsh northern lands the Chaos Warriors come from help make themselves all the more endurant. Unlike those of the mortal realm, of which they were once members, Chaos Warriors are nourished by the sheer carnage of battle. This means they do not need food, drink, rest or any other such restraints. This makes them all the more reliable on the battlefield, a valuable asset to the forces of the Chaos Gods that they worship.[3]

To become a Chaos Warrior a Northman must make a pilgrimage to his Chaos god's shrine, where he will offer his soul and a suit of Chaos armour is permanently bound to his body. After this Chaos Warriors live for nothing more than spreading terror and death to those weaker than themselves and their Northmen kin. Chaos Warriors regularly join marauding warbands marching south to terrorise more civilised nations such as The Empire, Kislev and Cathay.Needs Citation

The greatest warrior within their warband will often go on to become a, Chaos Knight or Chosen, others will then become Aspiring Champions, the greatest will become a Champion of Chaos and possibly even a Chaos Lord.

Those Chaos Warrior who serve Khorne have no need of drink, food or sleep as they are nourished by the carnage that they cause and few have anything but contempt for the cowardly and weak. They slaughter with a vengeance, for within is a part that rages against that which they has become and in carnage they find a form of solace as they fulfil their purpose as instrument of Khorne’s will. Fighters of unmatched prowess with infernal strength and toughened bodies encased in suits of hell-forged armour, each is equal to several battle-hardened mortals. [7]