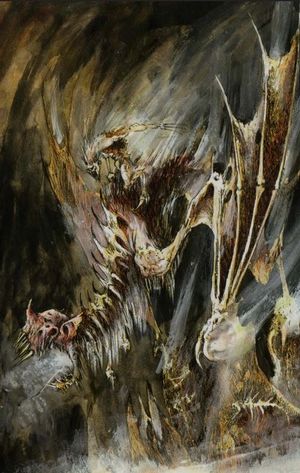 Terrorgheists are enormous bats that are turned into undead mounts by powerful vampires. [1a]

From the hidden places of Sylvania, titanic undead bats the size of Dragons soar out from their caves to hunt horses, caravans and pegasi. The lairs of the largest Terrorgheists are strewn with enough bodies to make a Necromancer rub his clammy hands in glee. Few have the nerve to stray inside such a cave, though, just in case the Terrorgheist returns from its hunt to find a meal has sought it out, rather than the other way round. [1a]

The piercing shriek of these huge beasts contributes to their truly terrifying reputation, for as their vision is poor, the swooping monstrosity ensures that its prey is rendered motionless by emitting the shriek that can stun even a Bretonnian warhorse into paralysis. The Terrorgheist will then dive down, gather up rider and mount in its talons, and return to its lair to glut itself on warm blood.

However it is the mortal remains of these troglodytic beasts that the Strigoi Ghoul Kings bind to their service for the binding process comes easily to these reclusive Vampires. As Dark Magic swirls around the monstrous body of the cave-creature, a bond of blood is formed between master and beast. Once the ritual is completed the arisen Terrorgheist, like any other creature that drinks from a Ghoul King's veins, has formidable necromantic power coursing through their blood which can heal even the most severe of wounds.[1a]

In death, a Terrorgheist becomes even more a nightmare made real. Guided by its master's will, the monstrosity creaks through the clouds above the battlefield on blotch-skinned pinions, its rotten flesh and withered organs open to the night air. Hanks of patchy fur cling to its skeletal neck, and its huge skull swings from side to side as it tracks its prey on the plains below. [1a]

It is the deathly shriek of an unliving Terrorgheist that is perhaps its most fearsome aspect. As the magics of undeath are worked upon the beast, its cry is transformed from a simple but shockingly loud noise into a barrage of eldritch power. Some say the Terrorgheist's shriek is nothing less than the screams of the damned, channelled directly from the Realm of Chaos. It matters little to the Terrorgheist's prey, for so devastating is its sonic attack that it can cause a man to die of fright in an instant. By venting this unholy noise as it dives down upon its prey, a Terrorgheist can cripple an enemy regiment moments before it slams into the reeling survivors, slaughtering the rest with tooth and claw.[1a]

Some of these undead creatures, when destroyed explode into a swarm of blood drinking bats that attack all nearby, whilst others have fangs so encrusted with the remains of previous prey that their bits is poisonous.[1a]