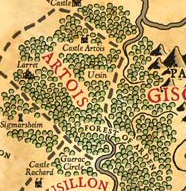 The Forest of Arden.

Spreading over the hinterland of Bretonnia, the Forest of Arden is a huge oak forest that extends up the slopes of the Grey Mountains. Because of this, it is often invaded by Orcs, Goblins and worse enemies descending from the higher peaks and passes into Bretonnia. In the depths of the forest they are able to hide and organise raids of the surrounding countryside. There are many marshes and lakes within the forest as well as dense thickets, making it difficult to track down the raiders when they are pursued.

Many vile creatures, huge monsters, dragons and other savage beasts linger and breed here and so the forest attracts Knights Errant and Questing Knights eager to hunt them down, slay them, and thereby win honour. Most of these knights never return, while the remains of others are sometimes found centuries later, their rusting armour and bones scattered around the lair of some hideous beast, or glimpsed through the visor of a great helm, while swords lie embedded to the hilt in the bark of great oaks that have grown around them.

Creatures known to dwell within the forest include: Preyton. [3a]

The Vampire Lord Malvous fled into its depths, Duke Hagen and his knights hot on his heels and there he discovered a great source of power in its depths within ancient cairns. He summoned monsters from the forest, awoke the predatory trees and the dead to aid him, but was defeated and destroyed by the Duke with the aid of the elves of Athel Loren. [2a]