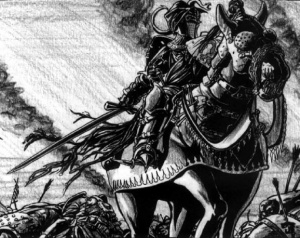 Mallobaude, also known as The Serpent or The Black Knight, was a mysterious figure who appointed himself Duke of Mousillon and later attempted to claim the crown of Bretonnia.

The origins of the knight known as Mallobaude are uncertain. Few if any know his true identity, although rumors persist that he is the bastard son of King Louen Leoncoeur himself. What is known is that Mallobaude was once among the most skilled and honorable Knights Errant in the land. After proving his valor Mallobaude earned his spurs and was confirmed as a Knight of the Realm; however, so dedicated was Mallobaude that he immediately set aside his lance and took the vow of the Questing Knight.[1a]

For many years Mallobaude sought the Grail, traveling the length of Bretonnia and performing countless heroic deeds. As recounted in one tale, however, Mallobaude began to despair that he had been forsaken by the Lady of the Lake and would never receive her blessing. Weary of his quest, he came to rest at a Grail Chapel. When greeted by the Grail Damsel, he angrily questioned why he should continue his quest if he were never to drink from the Grail. The maiden explained that the true quest was a trial of the spirit -- whether a knight could accept that he may never find the grail and yet resolve to continue seeking it. Heartened by the damsel's words, Mallobaude left the chapel in the morning and rode to a place where he could conquer his despair: Mousillon, the Land of Despair itself.[1a]

Of the trials that Mallobaude faced in the cursed lands of Mousillon, none can say. All that is certain is that eventually Mallobaude came to the edge of the Forest of Arden. There he beheld a clear lake surrounded in mists, and watched as a hand reached up from the water holding aloft the Grail. But when Mallobaude took up the Grail and sipped its contents, he had a stunning revelation. Mallobaude did not become a Grail Knight, nor did he perish, as would those with impure hearts. Instead he saw through the veil of magic and discovered a terrible truth behind the Lady of the Lake. With this shocking realization Mallobaude became outraged at the lie that had shaped his entire life. He resolved to claim the throne for himself and free Bretonnia from the Lady's falsehoods forever.[1a]

Mallobaude returned to Mousillon, determined to transform its desolate lands into a power base from which he could enact his master plan. He began garnering support among the few remaining nobles of Mousillon and brokering deals with all sorts of disreputable characters, many of whom were suspected by the populace to be Necromancers and even Vampires.[1b] By the year 1539 (2517 IC) rumors had spread throughout Bretonnia of an accursed army gathering in Mousillon, led by a mysterious knight clad in black.[2b] Mallobaude's army did not want for soldiers, as disgraced knights and vile cutthroats flocked to his banners. From the among the most loyal and skillful of these ruthless warriors Mallobaude formed his personal retinue, the Knights of the Black Grail. [3]

Backed by an ever-growing army, Mallobaude commandeered the ancient city of Mousillon and raised the banners of the Serpent above its walls. The Black Knight then proclaimed himself the rightful Duke of Mousillon.

On Winter's Eve of the year 1543 (2521 IC), Mallobaude began his war for the crown of Bretonnia. The defenders of the realm had been scattered and bloodied by Kairos Fateweaver's daemonic invasion of the previous year,[4] and King Louen decreed that Bretonnia's armies must gather and unite before facing the threat of Mallobaude. Ignoring his king's command, however, Duke Armand of Aquitaine led his army to face the Black Knight in battle, meeting Mallobaude's forces on the edge of the Forest of Châlons. Despite the support of the Fay Enchantress Morgiana, Armand's forces would have been quickly defeated had the Branchwraith Drycha not arrived with a army of forest spirits. Mallobaude's army was hard-pressed by this new enemy, yet the Branchwraith's host withdrew as mysteriously as they had appeared. Worse still for Duke Armand, the Fay Enchantress had also vanished, and without her aid the army of Aquitaine was routed by the Serpent's forces.[3]

Following Duke Armand's disastrous loss at the Battle of Châlons, dukes Huebald of Carcassonne, Adalhard of Lyonesse, and Chilfroy of Artois all declared their allegiance to Mallobaude. Despite these setbacks, the king still had the advantage. However, a year later, it was revealed that he had struck a bargain with Arkhan the Black, whose undead began to swell Mallobaude's ranks.[4] It was rumored that Mallobaude had even become a Vampire himself.[3]

Around this time, the Wood Elves of Athel Loren decided that they could no longer watch as the two armies tore Bretonnia apart, for if Mallobaude prevailed, he an undead kingdom would form much of the western border of Athel Loren. [3] Thus an allied Wood Elf-Bretonnian army faced Mallobaude and his knights at the Battle of Quenelles. At the center of the battle, King Louen, wounded during a failed cavalry charge, was struck down by his son, though his body was never recovered. [4] Despite the presence of wood elf heroes such as Orion, Ariel, the Sisters of Twilight, Araloth, Scarloc, Skaw the Falconer, and Sceolan[3], the battle was lost. [4]

After this disastrous battle, Mallobaude then proceeded to travel Gisoreux, Adelaix, and Montfort challenging any knight he found to single combat, and defeating all. When he reached Couronne, the remaining dukes united their forces against him, but they were far outnumbered and easily dispatched. Again, Mallobaude challenged any knights to single combat. This time however, it was no worldly knight who appeared, but the ethereal Green Knight. Mallobaude and the Green Knight engaged in a fierce duel, with the Green Knight eventually beheading the Serpent of Mousillon. Deprived of a leader, for Arkhan had already slunk off, the rebellion soon crumbled. After the battle, the Green Knight revealed himself to be none other than Gilles le Breton, returning to his people in their hour of greatest need. He was quickly coronated, thus ending Mallobaude's Civil War. [4]