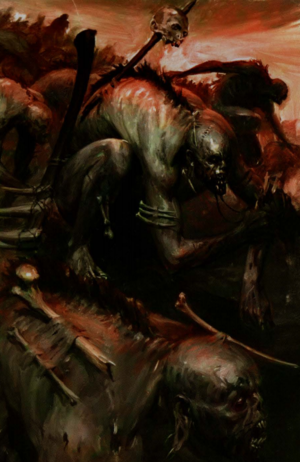 Ghoul or Crypt Ghouls are the degenerate descendants of humans who were reduced to cannibalism. Generation after generation they descended deeper into inhumanity, the acts of each generation leading to even graver acts of depravity.[1a]

Ghouls are utterly inhuman in their behavior, living off only the flesh of the dead. In form they are stooping and bestial with blotchy foul-colored skin. They have no real need of weapons as they have developed long claws which are encrusted with filth and disease. Long slavering tongues protrude from snarling lips which also reveal their sharpened teeth. [1a]

Ghoul kind first arose on the shores of the Sour Sea, a primitive people called the Yaghur who began to worship the growing power of the Great Necromancer, Nagash and dwelt in the shadow his citadel of Nagashizzar. Ritual slaughter of enemies, crimnals and captives ended in a feast and slowly they devolved to become Ghouls. [3a] [9a]

In Araby, they were part of the Cult of Mordig and were relatively civlised, some even wearing armour and using weapons in service to the cult. In -1150 IC Neferata used them in her battle to take the city of Bel Aliad [6a][6a]

Ghouls have arisen throughout the world. In the Old World in times of famine, the most ignoble of souls might turn to cannibalism to survive. The most isolated farms and villages have sometimes degenerated through this practice into ghouls. Entire hamlets of inbred folk have been put to the sword and the torch by The Empire's forces when their abhorrent curse was uncovered. As a result, Ghouls have literally been driven underground and make their abodes in catacombs, mausoleums and graveyards, where they can readily find food. The priests of Morr are dedicated to protecting the dead and often use witch hunters to purge the colonies of ghouls which have taken root.[3a]

Around 2510 IC, the packs that worshipped Omdra the Dread joined her war against Tamurkhan and Lord Drazhoath inflicting heavy losses before they were defeated. [8a]

2512 IC (Imperial Calander) saw the so called Ghoul Swarms arise as crops failed for a third year running and large battle were fought between the Knights of Stirland and ravenous packs of starving villagers. [4a]

Mnay Ghouls lurk beneath the streets of Araby. [6a][6a]

Ghouls are found beneath the the city-state of Tobaro with its large catacombs under the acropolis; Mordheim, the ruined former capital of Ostermark; and Marienburg where a villain dedicated to Khaine sold human flesh in a butchers shop, creating a growing population of Ghouls in the poorest quarters of the city.

The Ghoul King Rametep is served and defended by a court of Ghouls, rising to assist them if the threat is beyond them. They dwell beneath a cemetary in Miragliano. [2a] The great burial crypts in the hills near Mousillon are plagued by a small army of ghouls. [3a]

The ghoul packs that inhabit the Plain of Bones worship the ancient Nightmare Dragon Omdra the Dread as a Goddess. [8a]

The Ghouls are not undead creatures, but are often attracted to the armies of the Vampire Counts. Instinctively sensing the dark magic surrounding undead lords, they are drawn to vampires like moths to a flame. In particular the so called Strigoi Ghoul Kings often forming twisted courts around them. After a battle they will flock to the scene at night and make the battlefield a dining field. [2a]

As long as they outnumber a foe they are fearless. [1a]

They are armed with filth-encrusted claws that are as effective as Poisoned Hand Weapons, but some also wield scavenged weapons or crudely shaped and sharpened bones. [4a] They are often led by a Crypt Ghast. [3b] Some Strigoi Ghoul Kings are served by faster, more effective and reliable ghoul fighters - their Charnel Guard.