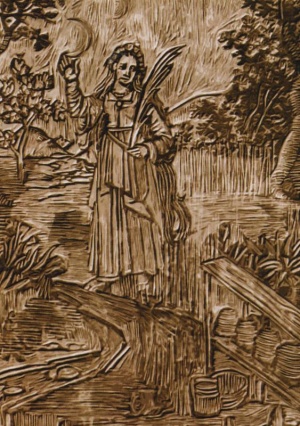 Rhya is depicted as the personification of mother earth - a lovely, motherly woman, her hair a tangle of flowers and branches. She is also depicted as a doe.[1]

Rhya is the Earth Mother, the goddess of all that grows and lives, midwife of animals, and the goddess of gentle winds, springtime rain, crop plants, and the gentler aspects of nature. She represents the fertility and bounty of the earth and mothers everywhere. In more urban areas some of these aspects are credited to Shallya, the goddess of Healing and Mercy.

It is Rhya to whom the people of the Old World pray to for fair winds, moderate rains, healthy plants and animals. Wife of Taal, god of Nature and Wild Places, Rhya is seen as the more merciful and gentle of the pair, and is often asked to intercede with her husband to calm his rages.

Rhya does not have her own cult or temples, at least in her Old World aspect. Much of her worship has been incorporated with the cult of Taal. Some temples worship the married couple.

Rhya shares most of Taal's main festive days: the summer and winter solstices and the autumn equinox.[2]