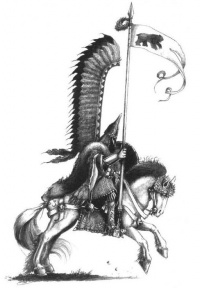 Gospodar are the dominant people of Kislev forming almost all of the ruling elite, including the Tzars and Tzarinas. [3a]

In general, Gospodars are a tall, pale skinned and physically imposing folk with fine features that often seem exotic to foreigners. Their hair is often straight and ranges from blue-black to reds and blonde whilst a blessed few are born with white or silver hair. Gospodar women are renowned throughout the Old World for their fair-skinned beauty. [3a]

The Gospodars were the tribal people who crossed the High Pass of the Worlds Edge Mountains from the east. They were well armed, and led by their Khan-Queen Miska the Slaughterer, displaced the native Ungols, and eventually established the nation of Kislev. The Gospodars themselves had been pushed westwards by the growing strength of Chaos.

After founding the city of Kislev, they became known as Kislevites. The Gospodars remain the dominant people of Kislev. They are a wealthy people and have great pride in their accomplishments. They are ruled by Tzarinas and Tzars who have tried to knit the peoples of Kislev into one nation, although there is still significant distinction between the Gospodar and Ungol people. They have attempted to convert all of the people to the Gospodar lifestyle and language and general society, but have failed so far.[2]

The Cult of Ursun the Bear is the most powerful religion in Kislev. [3a]

Gospodar women are also afforded the same rights as men, which can be confusing to outsiders unfamiliar to such equality. [3a]