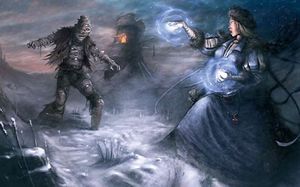 The Ice Witches are women of great magical power and one of the most famed and feared political groups in Kislev. [1a]

They are physically and spiritually linked to the seasons, growing weaker in the summer and stronger in the winter and being able to command the very elements and bring to bear the might of the land in defence of their great nation. [1a]

Some live within the towns and cities, others in the deep wilderness but they will all spend at least a month a year in the wild places of Kislev[2a]

According to the Ice Witches themselves, long ago a great spirit — called variously The Ancient Widow, Kislev, or simply The Land— whispered to a Gospodar shaman-priestess. It promised great power if she seized a distant, frozen realm where the spirit was trapped by the Daemon Gods of Chaos. Desperate to aid her people, the shaman agreed and was granted the power of winter in return. She quickly mastered her new powers and used them to bind the disparate clans into a single people, naming herself herself the first Khan-Queen. [1b]

She then led her people in search of the Ancient Widow’s land and after generations of bloodshed on the Endless Steppe, a descendant of the first Khan-Queen led the Gospodars across the Worlds Edge Mountains. There she found a vast snow-covered plain pulsing with icy power. Once there, she immediately collapsed to the ground and wept frozen tears, for she knew her search had finally ended. By this time, there were many women wielding the Khan-Queen’s Ice Magic.[1b]

Tzarina Katarin is their most famous and powerful member and some say she is a reincarnation of Miska the Slaughterer, the first ice witch and Tzarina of the early Gospodars. Katarin, in turn, favours the ice witches, granting them legal privileges similar to those possessed by the nobility. [1a]

Part of being an Ice Witch is being able to keep winter in your heart, but some can find their mind affected and overwhelmed by their elemental nature and cause her to go Ice Wild - a feral madness where they become a true force of nature. Some simply vanish, a fortunately rare few can even level entire towns in their fury whilst most simply head into the North. [2a]

The Sisterhood guards a number of potent legends including one that claims a male witch will one day taint the pristine flows of Ice Magic, changing it forever and so ever since the days of Tzarina Shoika, men have been banned from becoming spellcasters in Kislev. [1b]

Once a year as part of the winter equinox celebrations, noble girls are brought before aunt, grandmother, or other relation, who tests to see if any are blessed by their Khan-Queen ancestors and ice witches tour local Gospodar communities and appraise shivering lines of peasant girls. Those that have the talent are whisked away to become apprentice witches. Moreover when a ice witch comes upon a Gospodar girl with the talent, they are duty-bound to take her in as an apprentice or at least take her to another witch for training. [1b]

At the same time, across the land, the ice witches emerge from the frozen oblast and assess lines of shivering Gospodar peasant girls, barely old enough to be called women. They are then into the depths of Kislev’s cruel winter and are taught the ways of the Khan-Queens of old. The survivors (many do not) are forever changed becoming aloof, cold and mature well beyond their years, aware of their insignificance beside the might of the Ancient Widow’s. Eventually, successful apprentices are allowed to venture forth as Maidens of the Ice. [1c]

They now seek a deeper understanding of Ice Magic, mirroring the Ancient Widow as closely as possible, swear vows of chastity (to represent being widowed). These Maidens of the ice can be found in the most unlikely places, questing for understanding across the frozen oblast, facing Kyazak, spirits, and ferocious Greenskins with equal resolve. Her vow of chastity ends when she gains insight into her magic and becomes a full ice witch but some never do so. [1d]

The ice witches of Kislev are an organised sisterhood who work together to achieve shared goals. They were formed more than a thousand years ago by the Khan-Queens and have manoeuvred their way into influencing almost all matters in Kislev. They seek to ensure that nothing is beyond their reach and they ruthlessly suppress competing philosophies and magic, promoting instead those sympathetic to them. [1b]

Even the religious cults of the nation are carefully monitored, having been guided through the centuries and the Sisterhood is keen to ensure no Kislevite religion ever gains the same all-encompassing power seen in other Old World nations such as the Empire. [1b]

The ice witches guard the icy magic that courses through Kislev and although most Kislevites believe the ice witches’ first duty is to protect Kislev, they are wrong. However to most ice witches, defending Kislev is simply a means to that end. The magic they work so hard to safeguard moves through a network of leylines throughout Kislev, gathering in nexus points, many of which are capped by standing stones, some of Elf heritage, others the sacred sites of long dead Human tribes such as the Belthani or the Scythians. Most sites now have an ice witch guarding them, often living in a nearby Gospodar settlement. [1b]

Like the infamous Lahmian Sisterhood, the Ice Witches have infiltrated the nobility as confidantes, mistresses and wives, mistresses, and manoeuvre their sisters into positions of power. Now their influence in Kislev is almost unrivalled, they are almost always listened to and often obeyed. [1b]

There is no formal structure within the Sisterhood and standing is based upon a witches social rank in Kislev, their bloodline, their current situation, beliefs, who trained them, who their apprentice is, their Magical power and a dozen other factors. Several factions have formed over the last thousand years, and most work hard to get their agendas across but these are seldom more than a few like minded women. [1b]

The only formal gathering is the annual Caucus at Frosthome in Erengrad which begins on the the day after Shoika Day (the summer solstice) and all witches travel (if they can) to the city. As flow of Ice Magic is at its most sluggish, this helps ensure magic is not used to settle arguments. The caucus can last up to a week and at the end, the most powerful witch (currently Tzarina Katarin, though she infrequently attends) declares the decisions to be made, which are then decided by a simple majority vote. [1b]

Katarin also hosts an informal gathering at the Bokha Palace for the noble ice witches on Miskaden (the spring equinox), after which there is a feast and a dance, however Peasant witches are suspicious that the event is used by the nobles to decide what they will table and how they will vote, allowing the Tzarina to ensure her policies go ahead even if she does not attend. [1b]

Individual witches often have very little to do with the common people of Kislev, remaining aloof and studying their Ice Magic. [1a] Some do marry and have children but these are invariably left for relatives to look after, with girls groomed for possible apprenticeship. [2a]

The Gospodars have long been influenced by their ice witches who are now also entrenched into the ruling caste of Kislev and many Gospodar communities across Kislev are watched over and advised by ice witches who can make use of their devastating powers if invaders arrive. Thus, though most Kislevites are still wary of them, ice witches are normally very popular. Although in generally Ungols do not like the ice witches, they do usually respect them with the dislike more to do with the ice witches of noble birth often demanding Ungol resources and backing their requests with Gospodar might. [1b]

They are a rare sight outside Kislev. Peasant stories in the Empire claim they gain their powers by having a icicle thrust into their heart and which removes their emotions - Cold Hands, Cold Heart. [2a] By tradition, Ice Witches in the Empire are considered Priests rather than Wizards which helps avoids issues with the Colleges of Magic and the Witch Hunters. [3a]

In Warhammer Fantasy Roleplay (1st Edition), it was possible for a rare male to become a Ice Witch. [2a]