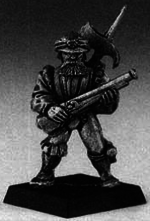 Streltsi, also spelled Streltzi, are a type of elite infantry in the Kislev Military. They are trained to fight both at range with Handguns and at close quarters with Halberds. The Streltsi originated when firearms were first introduced to Kislev by the popular and eccentric Prince Boydinov of Erengrad. Boydinov was obsessed with the technology of The Empire and after fighting alongside an army of Ostlanders against a Chaos horde in 2345 IC he created his own unit of handgunners after being impressed by the Ostlanders' usage of them.[1]

After initial superstition, handguns have been gradually accepted as essential weapons of war by the Kislevites. Before his death, Boydinov set aside a large portion of his wealth for the establishment and upkeep of a handgunner regiment, which are the modern day Streltsi.

Strelsi are probably based on the real-life Russian Imperial soldiers, Streltsy, infantry armed with a combination of musket and pole-axe. They were conscripted from the rural peasant population, and thus were of poor quality.