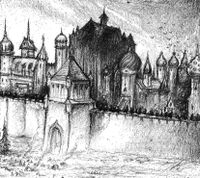 Chernozavtra is a walled town in the Wheatlands of Kislev. [1a]

It was built on the island in the Zapadryeka River. [1a]

In 2252 IC a small colony was founded as the island was perfect for trade and had rich, black soil for growing crops which gave it its name - Black Tomorrow. [1a]

It was quickly a target for raids by Orcs & Goblins and Dolgans which were a great strain until the town walls were finally completed in 2270 IC. [1a]

By 2300 IC it had become the richest colony in the Wheatlands and managed to sign a treaty with the local Dolgan tribe. [1a]

2302 saw disaster as the forces of Chaos swept across Kiselv and although the Dolgan retreated to within the town and the defenders together put up fierce resistance for four months, eventually the horde overwhelmed them and killed all within the town. It would be another hundred years before the colony was re-established but again it began to flourish. [1a]

In the winter of 2478, plague arrived and the majority of the population died and the few survivors fled, leaving the town once again empty save for the many unburied corpses. [1a]

A necromancer Annandil learnt of the disaster and decided to set up home there, much to the horror of the local Dolgan who began attacking the town but their loses only bolstered the dead defenders. [1a]