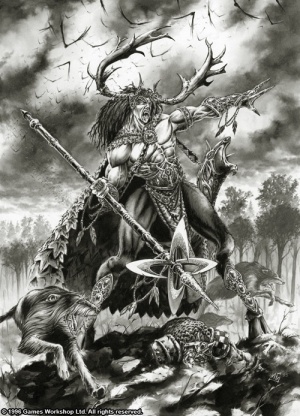 Orion, king of the Wild Hunt

Orion is the consort-king of Athel Loren and the living avatar of Kurnous. [1a]

At the height of his power in midsummer, Orion is a terrifying being of majesty and power. He stands over 10' tall, and his lithe, green-tinged body ripples with barely contained anger. As the moons align overhead on midsummer's eve, a beautiful cloak crafted by his Queen is draped over his shoulders, and the great horn of the Wild Hunt is placed reverently before him. As the time of the conjunction draws near, he takes up his weapons from their shrine within the Oak of Ages. At midnight, Athel Loren goes utterly silent – not a creature stirs – for all know that the ride of the Wild Hunt has come.[1a]

Orion's powers gradually fade and his anger slowly diminishes throughout every autumn, until he is all but spent when winter takes hold of the forest. As the snow and ice closes in on ancient Athel Loren, Orion strides naked into a flaming pyre constructed at the centre of the Kings Glade. No trace remains of Orion save his ashes, which are presented to Ariel who then takes them deep into the Oak of Ages and seals them, aswell as herself off from the outside world. [1a]

On the first day of spring Ariel awakens from her slumbers and the reborn Orion thunders from the trees, growing in power and majesty until midsummer when his power and fury begins to diminish, ultimately until he dies as winter embraces the forest. Such is the way of things; the continuation of the never-ending process of death and rebirth. [1a]