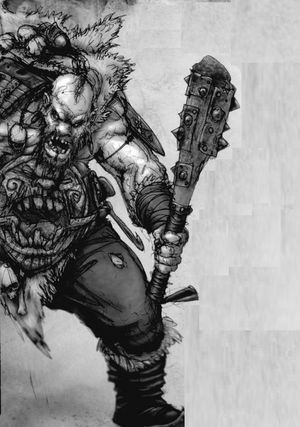 Ogre Bull is the term used for a adult male Ogre. [1a]

They form the majority of the warriors in the armies and warbands of the Ogre Kingdoms creating a powerful mass of unwashed fat and muscle that can destroy settlements. [1a]

Bands of Bulls are led by Crushers with loudest of his subordinates - the Bellowers relaying orders even over the din of battle. [1a]

A bull stands far taller than a human with hugely muscled belly - a symbol of status in their culture. [1a]

Almost all Ogres carry at least one club but some also use spiked gauntlets or heavy metal gloves called Ironfists. [1a] The weapon of a ogre reflects its owner, some favour blades but most prefer a good solid club, a trusted weapon that will only be eaten in the direst circumstances. [2a]