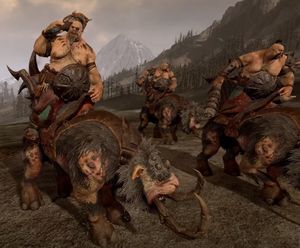 Mournfang Cavalry are powerful cavalry of the Ogre Kingdoms. [2a]

They are the end result of Ogres trying to break the Mournfangs, the massive beasts that inhabit the caves inside the Mountains of Mourn. It took whole centuries for the Ogres to figure out how, but their power makes it worth it. Firstly, the Mournfangs boost the already formidable speed of an Ogre, which, when combined with the weight of the beast and its rider, literally crushes several enemies per beast before the regiment even has time to notice. A split second later, real punishment starts when Mournfang tears warriors apart with its giant tusks. Sometimes the Ogres might not even have time to use their prized clubs or ironfists! Far more often, though, there are enough foes to exercise their favourite weapons on the rest of the battered troop, chasing down anyone trying to run, leaving nothing but trampled corpses behind.[1]

Mournfangs will not breed in captivity but one broken to the will of an Ogre will live, travel and fight with their tribe. [2a]

As one of the heaviest cavalry in the world, an Ogre mercenary on a Mournfang can earn huge fees. [2a]

Rolgut Hamfist was the first Ogre to discover that Mournfangs had leadership challenges to establish the pack's alpha position. Brutal and bloody affairs, the victor is often exhausted, battered and bloody - a perfect time to jump onto them and master them! Should the Ogre fall off, they will quickly be torn apart and eaten. [2a]