From Warhammer - The Old World - Lexicanum
(Redirected from Slaughtermaster)
Jump to: navigation, search 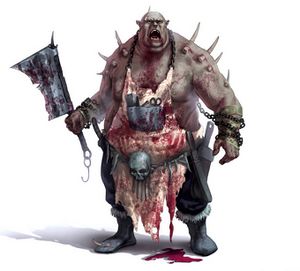 Butchers are Ogres who serve their race's deity of hunger, the Great Maw and use Gut Magic. [4a]

Some Butchers replace their tusks with flint, hammered into their jaws whilst others have sets of teeth for different types of food. [3a] As one would expect, they are grossly obese, their layers of fat making them particularly difficult to kill. They are also covered in blood, meat and entrails left over from their rituals. The appalling stench does not bother the Butchers in the slightest; in fact, they enjoy rolling around in these gruesome by-products of their faith. Unusally they do not wear a gut-plate, trusting to the protection of their god. [4a]

Should an infant Ogre be chosen by portent as a potential butcher, he is given to the tribe's Butcher who force-feeds him until he is strong and fat. They are given rotten and poisoned food to build up their resistance to toxins and which parts of a beast can be devoured to augment their magic. [4a]

As the servant of the Great Maw, a Butcher can eat just about anything, including things thought indigestible or even outright dangerous. This makes poisoning a Butcher a pointless exercise, since his body can easily deal with it, no matter the quantity of poison used. While a creature like that would be looked down on with disgust and horror in any civilised society, the Ogres respect and adore them, for they provide a two-way link to the Great Maw; the deity gets its offerings, while Butchers gain the ability to harness its gluttony for the so-called Gut Magic.[1][3a]

By ritual consumation of food, usually meat, they are able to channel the hunger of their god to enhance the bodies of their comrades, break their foes bones or even cause the ground to open up and swallow enemies. A few Butchers also use magic beyond that of the Great Maw. [4a]

The most fearsome, largest and powerful Butchers are given the title Slaughtermaster. [4a]

They are usually found in the thick of any ogre battle using both their magic and their cleavers. Poison has no effect on them. [4a]