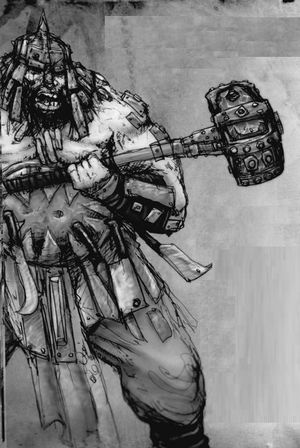 Ironguts are ogres chosen by a Tyrant as his personal bodyguards. [1a]

Though not necessarily any tougher or stronger than their fellow ogres, the simple fact of being chosen gives them an intractable belief in their own superiority, amplified by the respect given to them by the common Bulls.[1a][2]

As their name suggests, Ironguts are capable of ingesting almost anything, the only Ogres that can beat them at that are the shamanistic Butchers and Slaughtermasters. The leaders of Ironguts must also excel at this, for otherwise they wouldn't be known as Gutlords.[1a][2] They are known to display this prowess by consuming such items as chainmail armour, cartwheels, hot gravel and rusty nails. [4a]

Some bands of Ironguts are made up of the drinking buddies of the Tyrant whereas others are their immediate family and a few formidable tribes are almost all Ironguts. [4a]

At the Battle of Magma River, the Rocksplitter Tribe was ambushed by thousands of Skaven and by sheer wieght of numbers pushed them back to a river of lava. It was only a charge by the Ironguts that broke the Skaven line, shattering their morale and saving the tribe. Ironguts defeated the Warriors of Chaos at the Battle of Bloody Ice in the long year without sun as well as broke into the Dwarf mine at Cragspike Peak. [4a]

As the Tyrant's bodyguards, Ironguts have the best wargear, fighting with the large two-handed clubs, giant scimitars, or young tree trunks reinforced with stone. They can also afford heavy armour, which generally consists of large chunks of enemy armour hammered together. In a rare display of hygiene, some of them will even wash it out! The Gutlord and other powerful individuals might have custom-made armour, as befits someone in their position.[1a][3]

Gnoblars owned by Ironguts tend to take after their masters acting as enforcers or even leaders of their kind. [5a]