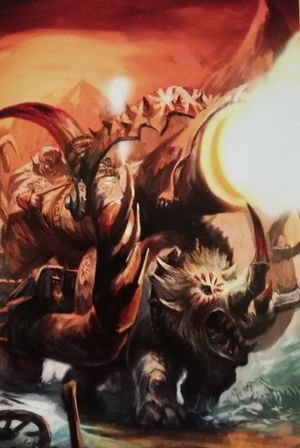 Ironblasters are the largest, and therefore the most powerful blackpowder weapons in the Old World. They were originally created by the ancestors of the Giants, the great Sky-Titans. With their downfall, the Ogres have claimed these guns for themselves.[1]

Due to its enormous caliber, the Ironblaster is loaded with regular-sized cannonballs in the same way as the Empire cannon might be loaded with the grapeshot. It proceeds to fire with a blinding flash and a truly deafening roar, the by-product of vast quantities of blackpowder. Each cannonball is propelled at a sufficient speed to smash through the stony hide of the Warsphinx, leaving no chance to the humanoid soldiers. Indeed, the pulverised remains are impossible to indentify from each other.[1]

For the sake of extra mobility, the Ironblaster is mounted upon a Rhinox, just like a Gnoblar Scraplauncher is. However, no Ogre would trust such a rare weapon to the Scrappers, preferring to fire it themselves.[1]

In 2211 IC, during the Great Gnoblar Purge the Ironskin Tribe held a contest to unleash the most destruction. It was Bhograt Seven-bellies who first used a salvaged Sky-Titan cannon mounted on a Rhinox on the gnoblar tunnel town, destroying it in one glorious explosion. [2a]

Many Ogres of his tribe followed his example, seeking relics of their ancient enemy and by the 2500s, many tribes boasted at least one Ironblaster. [2a]