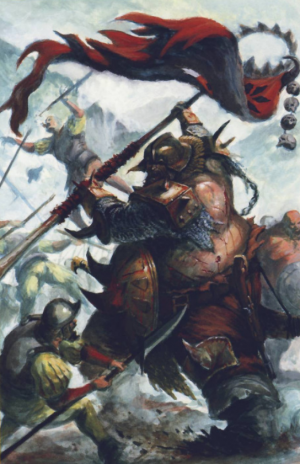 Ogre Bruisers usually act as enforcers or under-chieftains within their Ogre Kingdoms, and they spend a great deal of their time smashing and pummeling in the name of their Tyrant.[1a]

As a payment for using their fighting skills and brawn, Bruisers have many privileges in the tribe. Not least of these is the license to smack seven shades of dung out of any Ogre not toeing the line, not eating messily enough, or spending too much time playing with his Gnoblars.[1a]

This bullying behaviour doesn't make them popular with the rest of the tribe, though most Ogres have learnt that it's better to keep their mouths shut -- at least while the Bruiser is within hearing distance, anyway. Occasionally an Ogre will fight back, and in the unlikely event that he wins the resulting brawl, he will be allowed to take the Bruiser's place. This right of challenge serves to keep the Bruisers in line, and ensures that they don't take too much advantage of their privileged position.[1a]

A Bruiser is second only to the Tyrant in terms of pure size and strength, and is often related to the Kingdom's ruler by blood relations. Comparable to the chieftain of an Ogre tribe, it is the Bruisers who generally keep order and disicipline within the ranks of the tribes when the Tyrant's eye is elsewhere. They are physically massive and are generally the champions of the Ogre games that play such a large part of their culture and society.[2a]

Occassionally, a Bruiser will place a leadership challenge to the incumbent Tyrant, but it is common for a Bruiser to be content with the pure violence of his position without the hefty burden of ruling and decision-making. Some Tyrants prefer Bruisers that are no more than huge, muscle-bound thugs with no ambition and the brains and temperament of a Rhinox. Not all Bruisers are simple-minded brutes, however. Many are veterans of dozens of campaigns who have traveled through the Old World and beyond, learning the hard way what works on the battlefield and what does not. These veterans have seen it all, and are content to act as loyal advisers and henchmen to the Tyrant. He, in his turn, is grateful to have at least one or two followers he can trust to do the right thing at the right time.[1a][2a]

Top fighting Bruisers are often found as the captains of Ogre mercenary bands, having enough intelligence and experience to negotiate a good deal, while still having the brute strength needed to make sure the rest of the crew do exactly as they are told. Bruisers are sometimes entrusted with the tribe's standard, a massive banner hung with trophies and tokens of the tribe's bloodiest victories and accomplishments -- symbols that rouse great feelings of pride and aggression in his fellow Ogres. These banners are so robust that they are often used as weapons themselves -- having a metal-bound pole smashed into your head by a Bruiser will hurt no matter what's hanging from it.[1a]

In battle, it is the Bruisers who generally maintain discipline within the Ogre ranks when the Tyrant's eye is elsewhere. Physically massive, many Bruisers will seek to grow their reputations by performing great feats of slaughter upon a battlefield. Nothing suits a Bruiser better than being the one who single-handedly turned a fight around. Stopping a chariot with their bellies, breaking entire formations by themselves or squishing the life out of the enemy's mightiest champion are the kinds of deeds that a Bruiser must do to build up his name. With the exception of the Tyrant, Bruiser get the best pick of the spoils and equip themselves with the best wargear around, including outlandish items plundered from lands afar.[1a]

A Bruiser sometimes carries the tribe banner into war. [2a]