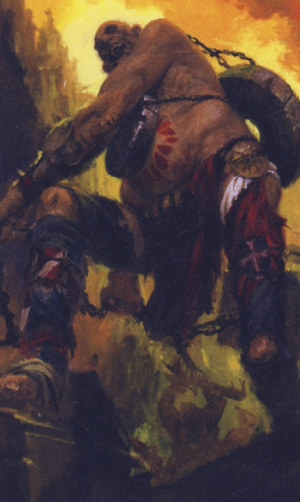 Slavegiants are Giants indentured into servitude for Ogre tribes.

Unlike the Giants that accompany the other races of the world into battle, those who look down on their smaller comrades and pick fights as and when they choose, the Slavegiants of the Ogre Kingdoms live a life of forced servitude.

It is seen as a great symbol of status for a Tyrant to own a Slavegiant, indeed the only thing that can get a Tyrant moving faster than a good fight or a good meal is a report of an unclaimed Giant's presence in his kingdom. Any Tyrant knows full well that should the Giant make it into a neighbour's territory, his rival might gain a serious advantage in both status and martial power. So it is that a Tyrant will gather up his favourite weapons, his most trusted Ironguts and the strongest chains he can find and go out Giant-hunting, not to kill, but to beat the behemoth into unconsciousness and subsequent servitude. Needless to say, this has accounted for more than one Tyrant having an oak tree slammed repeatedly onto his head.

A Tyrant, if he can restrain himself from attacking the Giant to prove his own superiority, will often try to recruit the solitary wanderers into his tribe. Sharing food or intoxicating drink with the enormous lummox often does the trick, as do promises of an easy life full of eating and drinking. All that is required of the Giant is that he helps the tribe in battle. More brazen Tyrants might actually intimidate a Giant into joining the tribe, either by displaying his own fierce fighting prowess to physically best the brute, or by scaring the behemoth with exaggerated tales of his tribe's past experience eating Skytitans. [2a]

Occasionally, though, a truly powerful Tyrant will succeed in beating him (how to topple a Giant is a trick long passed from Tyrant to son) and drag back a badly beaten and chained Slavegiant to be branded as his own. This event fills his tribe with ancestral pride, knowing as they do that their forefathers devoured an entire race of Skytitans during the first great migration. This is done partly to instill some tribal pride in the non-Ogre, but perhaps more so to remind his own tribe-mates that he is a friend and not a foe. In the heat of battle, such things often escape an Ogre's attention and there is a natural compulsion to fight (and eat) a Giant. After all, it is every Ogre's dream to boast of felling 'a big one'.

A Slavegiant is typically clad in extremely heavy chains, and goaded into battle with pikestaves. Usually it doesn't take much goading, as any opportunity to take out the humiliation of being enslaved and constantly shackled to cavern floors without the danger of being knocked down, beaten to death and eaten tends to be grabbed by the unfortunate Slavegiant with both millstone-size hands.