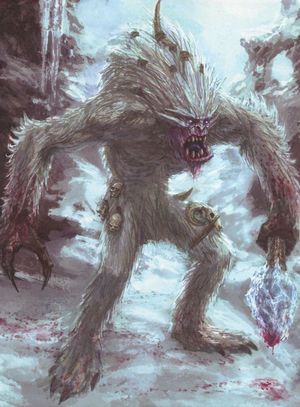 Yhetees ape-armed hairy humanoids with a great hunger of flesh. [1a]

The Yhetee packs inhabit the highest slopes of many mountain ranges, but are particularly common amongst the Mountains of Mourn [1a] and the place of their birth - the towering peaks of the Ancient Giant Holds.

There, high on the roof of the world, the Yhetees survive by preying on the beast herds of the highlands. The pale pelts of the Yhetees make them hard to spot in the snowy landscape, and only when their shaggy hair is overly matted and blood-speckled are they easy to pick out. There is a strange and almost supernatural connection between the Yhetees and the high altitude mountains themselves. Indeed, the Yhetees exude an aura of cold so powerful that those attacked by them will find their limbs stiffened and joints frozen, making them easy prey for these fierce and feral predators. A large scale attack by a whole pack of Yhetees is inevitably heralded by an avalanche, which the creatures trigger deliberately in order to trap their prey before loping down the side of the mountain to claw out and devour their half-frozen victims.[3a]

It's not uncommon for an Ogre tribe to include some Yhetees amongst its ranks. How or why the Yhetees are convinced to fight alongside the Ogres is a subject of much speculation. Some scholars suspect that Yhetees are a remote offshoot of the Ogre species dating back to the Big Migration. Others theorise that the Yhetees owe the Ogres a great debt from somewhere in their distant past, even before they evolved into creatures of ice and snow, and hence their habitual reply to the Ogres' summons to war is one of ancestral honour rather than any kind of learned response.[2a]

Whatever the truth of the matter, an Ogre Tyrant is able to summon Yhetees to war by a blast on the Great Horn, a huge curling tusk taken from the largest ice mammoth killed by the tribe. The acoustic qualities of this horn, twinned with the mighty lungs of the Ogre sounding it, send the blast echoing to the peaks of the mountain range. Riding great avalanches of snow, the Yhetees will enter the Ogre Kingdoms, ready for the great hunt that is open war. [2a]

Yhetee that spend too much time in the lowlands (to them, anything not above the tree line) become lethargic and they will begin to wither beneath a hot sun. For these reasons, once their obligation to the Ogres is complete, Yhetees will return to the mountainous lairs. [3a]

Yhetees are powerful, and can sprint as fast as an armoured horse. Because of this they are usually used by an Ogre Tyrant in much the same way the cavalry are used in other armies, to deliver swift attacks on weak points in the enemy line, and to help pursue a defeated opponent from the battlefield. With their sheer brute strength and ferocious nature Yhetees can smash a hole in any enemy battle line or maul any opponent that dares to stand up to them. [3a]

Yhetees have developed long, fused claws that are the natural equivalent of climbing pitons, with dewclaws on the back hinge, allowing them to climb features other races could not negotiate. A blow from a Yhetee's iron-hard claws will rip off limbs and heads with ease and they are also ideal for quickly digging out half-frozen victims buried by snow and ice. Even with their deadly claws, a vestige of Ogre-like behaviour remains in the Yhetees' ancestry to ensure that they still use clubs of a sort, fashioning ice weapons by the simple expedient method of snapping a bough from a tree and breathing pure cold onto it until it resembles a massive ice-encrusted club. Dominant Yhetees sometimes use pairs of these, smashing apart everything in their path.[1a][2a][3a]