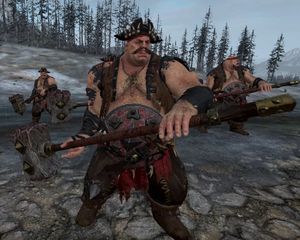 Maneaters are the most experienced Ogre mercenaries who have travelled across the world. [3a]

Often they have spent decades fighting for whoever will pay them most- a quest that has usually taken them across the whole Warhammer world. After they acquire enough wealth, trophies and tales of battle, they return to their home tribe. Their tales and experience make them popular amongst Ogres, and its no surprise that in battle they tend to cluster around him, trusting his every word and willingly accepting his orders (though not over that of their Tyrant!).[1][2][3a]

As a being that has fought for so long, there are few things that a Maneater has not successfully fought, and as such, little if anything will scare him. He, as well as the Ogres around, can be trusted not to suddenly flee, the often-exaggerated tales lifting the brutes' spirits. [1][2][3a]

At the Battle of Koffler's Gap, a small regiment of Maneaters held the attacking Chaos Marauders off for a full week until the Empire mustered an army to relieve them. [4a]

Their wargear also helps, for these Ogres wield the best weapons they could obtain during their exploits, up to, and including the handguns.[1][2] Some have fought for the Empire of Cathay and are equipped with the famous longsword of that land as well as lacquered bamboo armour. Others who have served with the Empire have a brace of handguns converted into pistols whilst those who have travelled to Ind might have one of that lands curved swords and be covered in gold jewellery. [3a]