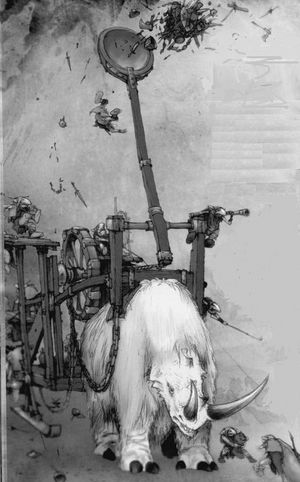 Gnoblar Scraplaunchers are warmachines of the Ogre Kingdoms inspired by Dwarf stone throwers. [4a]

After a successful battle, there are often weapons of the defeated littering the field. Ogres are too big to feel them, while no Gnoblar will be able to lift one. Instead, Gnoblars known as Scrappers collect them and use them as an ammunition for the weird war machine known as the Scraplauncher.[1]

The Gnoblar Scraplauncher can be likened in principle to a stone thrower; both hurl solid projectiles at the enemy troops. However, the metal barrage unleashed every time the Gnoblar invention fires tends to scatter in a dispersed rain of iron, hitting more soldiers than a Trebuchet ever will. Also, some of the blades launched might accelerate so much that no hide or armour will be able to stop one, making this war machine very deadly indeed.[1][2]

Lastly, while most war machines are absolutely immobile during combat, the Scraplaucher is mounted on undersides and is pulled by a Rhinox, allowing it to quickly move away, should the enemy get too close to it. If some light cavalry like Ellyrian Reavers dares to come near, there is every chance the Rhinox and its load will charge into combat instead, the bulk of the beast and high number of Scrappers being enough to guarantee victory.[1]

However, all this power comes with a price: the Scraplauncher is prone to a number of malfunctions. It might jam, fire in a completely wrong direction or even straight up in the air (with the hail of iron usually landing on the scraplauncher itself), fire a much weaker shot or simply fall apart. It is also not uncommon to see the sharp weapons wounding the Rhinox and sending it charging off in frenzy, pieces of wood and Gnoblars falling off on the way until it either flees from the battle or charges into the regiment in its way (even if allied) and gets killed, usually after trampling a great number of the unfortunates.[3]

Even if the Rhinox is not wounded so, it is still a big, mean beast that often doesn't wish to stay out of major combat and let the Scrappers shoot and can charge off trampling the close enemies with Gnoblars unable to stop it.[3][5a]