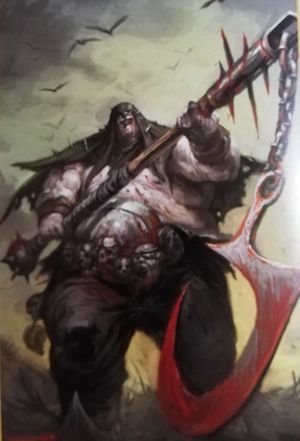 Bragg the Gutsman is an Ogre Bruiser who is dreaded even amongst his own kin, to say nothing of outsiders. [1a]

His reputation is well-deserved, for there is no enemy that his Great Gutgouger has failed to kill. Many great leaders and countless promising heroes have died a truly gruesome death in front of their terrified troops, who, paradoxically, die from swift decapitation. Thus, where Bragg has fought, a fallen Knight Errant is likely to get a better burial then the powerful Duke, or what would be left of him.

Bragg is breifly welcomed by Ogre Tribes but even killing their Tyrants he has found that no tribe will follow him so he is always moving, feeling the voracious stiring of the Great Maw driiving him on. On occassion he is joined by a few Gnoblars but most of the time he is alone. [1a]

The Ogre word for an executioner. [1a]

Bragg replaced his broken scimitar with the Great Gutgouger from the remnants of the glowing steel blades of a Black Orc Warlord. He has taken to wearing the black hood to enhance his reputation. [1a]