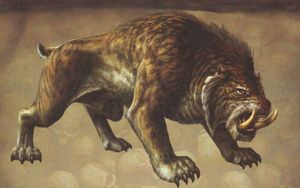 "Red in tooth and claw" - an apt description for a Sabretusk, as this powerfully muscled hunting beast is a creature perfectly evolved for slaughter. A lone Sabretusk will bound into the midst of its prey, slashing and stabbing with its elongated tusks, seeking to sever arteries and disembowel its quarry. The snarling assault that follows is a fury of pounces, bites and ripping claws. Should an entire pack of Sabretusks attack at once, then even the largest beasts that haunt the Mountains of Mourn can be quickly brought down in a howling flurry, leaving a red mist hanging in the frosty air. [1a][3a]

Sabretusks are opportunistic hunters that prowl the slopes and valley of the Mountains of Mourn. They are silent stalkers, preferring to stealthily work towards unguarded flanks or rear positions before springing their attack. However, a hungry pack is more than bold enough for a straightforward clash, and Ogres admit that even their most numerous hunting parties are not safe from the predations of Sabretusks. Although soundless while stalking its victim, upon slaying its mark a Sabretusk will proclaim its kill to the pack with an enormous roar - a frightful sound that echoes off the peaks. Despite their savagery, Sabretusks are fickle like all felines, and are not above turning tail and bolting should their initial assault go against them.[1a][3a]

They are also known to prowl around the ooze geysers and tar pits of the Dark Lands. [1a]

Ogres first encountered the Sabretusks during the Big Migration from the ruined plains. Although many stragglers were picked off and eaten by the predators, the Ogres have found much to admire in the Sabretusk and may have even learned how to take down large creatures by watching a pride work together to slay a beast many times their own size. [3a]

It is said that the first of the Ogre Hunters, Jhared the Red, was the first to keep Sabretusks in order to help him sniff out and hunt cave-beasts, having been raised himself by a Sabretusk mother. In honour of Jhared the Red, many Hunters still tame their own Sabretusks. Large sets of claw-scars are common sights amongst such Hunters, for some beasts simply refuse to be domesticated. Once broken into service, a Hunter will send his Sabretusks to chase down vulnerable or wounded victims, or to soften up the foe ahead of his attack.[2a][3a]