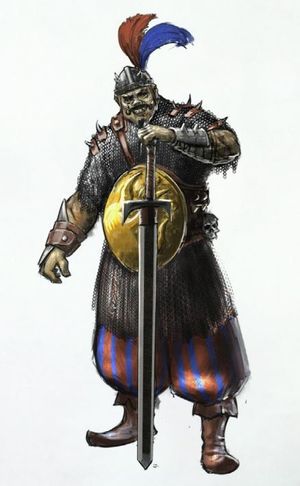 Golthog is a Mercenary Ogre seeking employment in Middenheim. [1a]

Golthog has become used to travelling among Humans and other non-Ogres and now very little surprises or confuses him about their strange behaviour. He is reserved but not unfriendly, careful not to frighten anyone to avoid provking an angry mob. [1a]

He emerged from the Mountains of Mourn with the rest of his tribe in the hopes of finding plentiful food in the lowlands but they were whittled down by repeated conflicts with humans and others until only Golthog remained. On one lonely night huddled alone in a bear cave, the ogre decided to learn the ways of the lowlanders and travelled extensively through the Empire. [2a]

He journeyed to Middenheim in serach of the famous Baumann's Blitztruppe mercenary band. [1a]

He stands some 8 feet tall, towering over all humans he meets and has short dark hair greased into angry spikes. [1a]