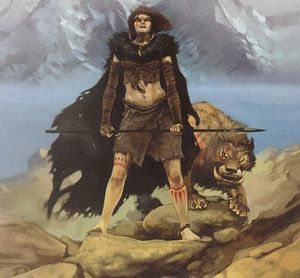 Katerina de Hansebourg was the daughter of a Bretonnian merchant who became the chieftain of Gnoblars in the tribe of Jarmoosh. [1]

As an adult in the Ogre Kingdoms she wore furs, large quantities of gold jewellery and was accompanied by her pet Sabretusk. [1c] Katerina has a mass of red hair and green eyes. [1e] Her voice was usually sharp and certain but on occasion could be a sweet as honey - usually when she got what she wanted. [1f]

As a eight year old child she travelled with her father to Pig Barter on the Silk Road to Cathay becoming attached to his bodyguard Jarmoosh. [1a] As they were returning home, the caravan was attacked by a horde of Goblins, but she did not react with fear, but with anger that monsters were attacking her father, managing to overpower and kill one that entered her wagon and then a second. However she would have been quickly overwhelmed if Jarmoosh, fulfilling his promise to her father, had not scooped her up and strode away from the battle. [1b]

She found a Sabretusk kitten hiding undeneath the corpse of its mother and adopted it as pet, naming her Tabby. [1j] As the years passed she became the chieftain of the Gnoblars in Jarmosh's tribe who although they did not understand many of her ideas respected her for her capacity for violence and ability to lead them to treasure. She endeavoured to teach them not to be cruel, punishing them when they inevitably succumbed to their base instincts. [1d]

She had reached eighteen years of age before she met her first human male, Sergei Chervez who had come with Krom to try and return her to her family. When Jarmosh, noticing what appeared to be the beginning of a mating ritual between the two tried to send her to the females quarters she refused and was hurled across the cave for her defiance. Sergei then attacked her Tyrant but was knocked unconscious with a single blow with his last moments awake being Katerina cradling his head against her breasts. [1f]

Sergei and Florin d'Artaud‎‎ attempted to persuade her to return with them to Bretonnia and her family. As she considered the matter, she took Sergei to her bed. [1g] Worried that he might loose the forthcoming battle with Bashar Zog, Jarmoosh asked the visting humans to take Katerina home with them. [1h] She refused, not willing to leave until she saw the fate of her tribe. [1i]

Following the defeat of Zog, they set out for Bordeleaux via Marienburg, although a sailor teasing Tabby was nearly killed on the voyage. [1k]

She has a fierce temper, when her hair was pulled by another child on the caravan she hit him, with a stone. [1a]

A large female Sabretusk who was the pet of Katerina - they had eyes the same shade of green. [1g]