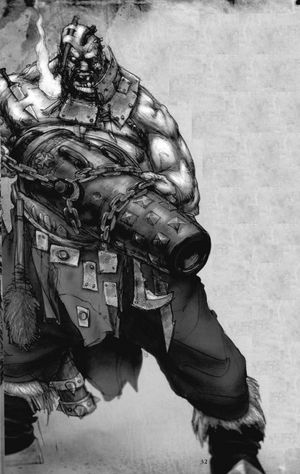 These Ogres are absolutely addicted to the thunderous roar of cannons and the immense destruction caused by their shot. Fortunately, they are few in number, for they either gain these cannons as a reward for great service from Chaos Dwarfs, or have to scavenge them from enemy artillery. Also, like all cannons, they are prone to misfires that can often kill the Leadbelcher himself. [1] [2a]

The alpha-males in charge of small groups of Leadbelchers are fittingly known as Thunderfists.[1]

Most have been brutally scared with eyepatches, torn and tattered ears and metal plates hammered into their faces and bodies. [2a] Many have burns from their careless use of black powder or misfires but most feel the loss of a few fingers, an eye or eyebrows is more than worth it for the joy of using such a powerful weapon.

Tales are told about the first ogres to use cannons as large handguns - including the Ironstomper Tribe following their attack on Karak Unfirth and the Loose Tooth Tribe who fought the army of Nuln. It was not until the Ogre Kingdoms began to trade with the Chaos Dwarfs they were able to gain access to a reliable source of specially forged barrels. [3a]

The Leadbelchers of the Bigclub Tribe beat to death the mutated monster-rat of the Crookback Mountain Skaven after pounding it from range. [3a]

Before they go to battle, they fill their cannons with scrap metal, nails and even on occassion a cannon ball. Then the barrel is bound to their arm. [2a]