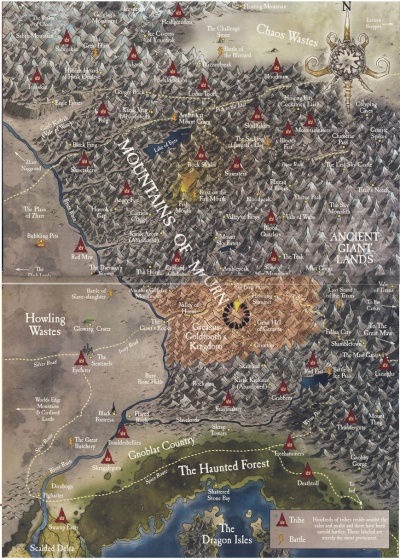 The Mountains of Mourn

The Mountains of Mourn are a large range of mountains in the east of the Warhammer World. They are the location of the Ogre Kingdoms. The Mountains are very high and desolate. In some places, especially the north, they are extremely cold and perpetually frozen. In the south the Mountains of Mourn tend to be quite dry and there is even volcanoes such as the Fire Mouth.

The Mountains of Mourn lie east of the Old World, across the World's Edge Mountains. To the west of the Mountains of Mourn lie the Dark Lands which holds the empire of the Chaos Dwarfs. In the north-west, the Mountains of Mourn connect with the World's Edge Mountains in a great desolate plateau known as the Great Skull Land. To the north east, the mountains pan out into a series of plateaus, ridges and plains covered in icy forests known as the Eastern Steppes. In the far north east lie the Chaos Wastes. To the east of the mountains are the enormous mountains of the Ancient Giant Lands, which then fall off into the once-fertile valleys of the Ogre Homelands. Beyond that lies Far Cathay. To the south is the Haunted Forest and the coast of the Sea of Dread while to the South east lies Ind.

While the Ogres of the Ogre Kingdoms are certainly the dominant force in the range, many races inhabit the Mountains of Mourn, including Beastmen. Many Greenskins also dwell here, particularly Black Orcs from the Dark Lands, Hobgoblin from the Eastern Steppes and Gnoblars, who serve the Ogres. The Empire have very small communities of maybe just a chapel and a house at the base of these mountains to provide shelter for travellers heading into the East. The Dwarfs, at the height of their power, had many holds in the Mountains of Mourn, but these were abandoned with the Coming of Chaos. More recent Dwarf expeditions have established camps here, however the intrepid Dwarfs must be constantly aware of attracting attention from the Ogres or others. The Silver Road passes through the Mountains of Mourn on it's way to Cathay, and many caravans from The Empire travel along it. The Ogres often exact a tribute from these caravans.

Due to their cold climate and remote location, the Mountains of Mourn have become a refuge for all manner of ferocious creatures. Many of these primeval beasts walked the land during the ice age, long before the arrival of the Old Ones, and are long-extinct elsewhere. Hard-headed Stonehorns and ice-breathing Thundertusks are a force to be reckoned with, while carnivorous Mournfangs and Sabretusks hunt along the ridges. Rhinoxen dwell in great herds in the valleys. With the Coming of Chaos the mountains became home to all manner of twisted, Chaos-infused mutants such as Chimerae and Manticores. Even smaller scavengers such as bloodvultures or fangweasels should not be underestimated. Largest of all the beasts of the Mountains of Mourn are the mighty Ice Mammoths. In addition, Frost Dragons have been known to make their lairs among the frigid peaks and glaciers.

Hippogriffs are present in the mountains in some numbers. [1a]