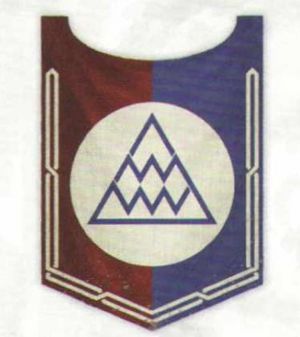 Karak Eight Peaks is the ruins of a Dwarf hold originally known as Vala-Azril-Ungol ("Queen of the Silver Depths"). [8a] The city fell 2,500 years after the founding of the Dwarf Empire and the beginning of the Dwarf Golden Age.

The city was built in the Worlds Edge Mountains, in a great bowl ringed by eight high peaks. Above the surface, walls encompassed a vast area, but most of the city was built below ground. Below the earth, the city was a made up of courts and plazas with great vaulted ceilings, and further below, the tombs of the Dwarf kings and deep mines.

The city itself was well defended. Not only were its fortifications formidable, but any hostile army would find even the approach through the eight high, enclosing mountains intimidating.

After the fall of the hold, many surviving clans fled to Karak Azul and became part of their hold

Before and during the War of Vengeance, the ruler of the hold was King Varnulf. [8a]

More than 700 years before Sigmar, the skaven first discovered the hold and realising that it was far too strong to assault directly, the Council of Thirteen formulated a long term plan to see it fall. Both Clan Gritak and Clan Mors weer tasked with burrowing beneath the city and into its deep well - this they did though it took over a century. [6a]

The Fall of Karak Eight Peaks

The end of the city came circa 2500 in Dwarf reckoning, when the volcanoes of the south exploded, belching great ash clouds that blotted out the sun, causing the crops that fed the city to die. The Dwarfs throughout the surrounding area retreated into the city, and suddenly the warlike Orc tribes were free to migrate into the newly-abandoned lands. The Dwarfs thought they were secure in the fortress city, but in reality they had just isolated themselves. The city was attacked from the tunnels below the city by Orcs, Goblins, and their allies in the attack, the Skaven. Taken by surprise, the Dwarfs fought a rear-guard defense in the tunnels and caves. The Dwarfs could only defend themselves from the onslaught, and gradually lost more and more ground in the defence.

The Skaven brought up warpstone from the hidden depths, or perhaps they had found it in the ash spewed from the volcanoes and using the tunnels dug over a century fed them into the wells and subterranean rivers feeding the city's water supplies, and terribly polluted them. [6a]

The skaven held the lower levels only at first as the dwarf defence was fierce and it was only when they unleashed the deadly poison wind that they could break through. The next few weeks saw the remaining dwarfs steadily driven upwards and soon only a few hundred were left. Acknowledging their defeat, the Dwarfs finally abandoned the city, after sealing up the sacred shrines and whatever treasures they could not take with them. [6a]

Several Goblin tribes established their strongholds in the city, where they warred among themselves, while in the caverns bred hideous creatures warped by the corrupted water. They fought a brutal war against the Skaven and during a battle in the ceremonial halls, Clan Mors collapsed the roof, sealing the skaven levels from the greenskins. Notably Clan Mors neglected to tell Clan Gritak and enslaved those few who surived the destruction, giving them sole ownership of the lower levels[6a]

Several expeditions have been made to retake the city or recover some of its relics, and thanks to the fame of the city and its riches, some were even humans from the Old World. Most of these adventurers never returned.

The most recent attempt was made by Belegar in 2473 IC who led the descendants of the clans that once ruled the city. Belegar and his Dwarfs have gained a foothold in the city - the Dwarfs largely confined to the surface and upper levels of the city and grimly hold on - despite being under a near-continuous siege. Slowly they find and seal off the tunnels which the Goblins and Skaven used to breach the city, as well as walling off areas too poisoned by Chaos to be reclaimed. [9a]

It was visited by the adventurers Gotrek & Felix, and it was in the tunnels beneath the hold that Felix came into possession of his magical sword Karaghul.[1]

The Skaven call it the City of Pillars and its expanse has changed hands many times over the centuries. In 2522 IC it was ruled by Clan Mors and had a population of about 95,000 Skaven. The ruling Clan mine the substantial warpstone deposits, growing rich and powerful on the profits as well as via the mercenary troops it sells to other Clans.[2]