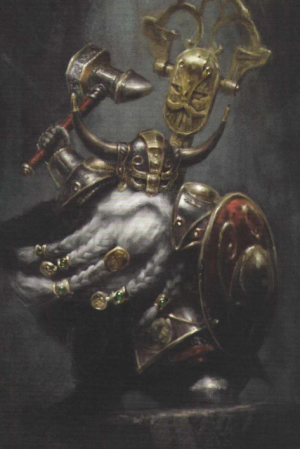 Belegar Ironhammer, born as Belegar Angrund and known by his followers as the True King of Karak Eight Peaks, is the current leader of the Angrund clan and the direct descendant of King Lunn, the last Dwarf to rule Karak Eight Peaks before its fall.

Since that time, Belegar has dedicated his life to reclaiming Karak Eight Peaks. He proclaimed himself King and fortified his position, encamping his forces into the wreckage of the once mighty surface structures of Karak Eight Peaks. There he remains, defiant and in a constant state of siege. From out of this slender foothold, the Dwarfs launch forays into the depths, bloody offensives intent on breaking their opponents' seemingly limitless armies, recapturing lower halls or seeking out lost treasures.[1a]

At Karak Eight Peaks, the Dwarfs are forced to contend with their arch-enemies, the Orcs, Goblins and the Skaven. These long-standing foes are led by the most devious of their kind, for the chieftain of the Night Goblins is none other than Skarsnik, self-proclaimed Warlord of the Eight Peaks, while the Skaven are led by the infamous Warlord Queek Headtaker. Belegar alone has been able to match wits with their adversaries, thwarting their every plot and defying every malevolent scheme.[1a]

While the grand mansion of their people - a hold second only to Karaz-a-Karak in terms of wealth and prestige - was being despoiled, the scions of the former king laboured elsewhere, shorn of home and honour. Many of the ruling heirs of Angrund have attempted to reclaim their former glory, to avenge the grudges bequeathed to them. Despite the weight of years and the hopelessness of the cause, when Belegar came of age, he made bold oaths and set out to recover his full inheritance.

Belegar has established himself as a master of subterranean warfare. On his orders are enemy probes smashed, ambushes overcome and infiltration paths blockaded. Yet Belegar is not content to sit behind his fortifications, and many times he has led assaults into the underhalls of his forefathers. There, from the shattered remains of his ancestors’ tombs, Belegar claimed the rune-struck chunk of rock that now serves as his Oath Stone. It is said amongst Dwarfs that his warrior skills are second only to those of the Slayer King, and that at need, Belegar can summon the vengeful powers of his ancestors, yet for all his victories, Belegar remains embittered, vowing to one day reclaim all of Karak Eight Peaks for his own.[1a]

Thorgrim’s rule took up where Alriksson’s had left off — reminding his race (and their enemies) that although the Dwarfs no longer had the power they once did, they were still a force in the world. One by one, ruined strongholds were reconquered. Progress was slow, as the Dwarfs fought grimly to establish footholds amid the ruins of their ancestors’ splendour. Thorgrim’s most ambitious plan was his attempt to rally the clans to aid Belegar, son of the recently deceased Buregar, in the task of re-taking Karak Eight Peaks. Since its fall, more expeditions had tried to resettle Karak Eight Peaks than any other hold, but all had ended in failure.

Great effort went into ensuring King Belegar’s forces could break into their fortress of old, as even in its ruined state, Karak Eight Peaks presented a formidable series of natural defences and deadly chokepoints. Dwarfs attempting re-entry in the past had been ambushed, poisoned and picked apart before they could penetrate the hold’s depths. To equip Belegar’s army, Thorek Ironbrow, Master Runesmith of Karak Azul, had forged new rune-covered axes and hammers, while Thorgrim gifted ancient weapons from his hoard to Belegar’s warriors. It was an army like the elder days, when entire battalions went to war wielding runic weapons and protected by rune-struck armour.

Aided by a throng from Karak Azul led by Thorek Ironbrow, the Dwarfs broke through the outer defences and fought their way into Karak Eight Peaks. From there, they took a portion of the upper city and fortified it against counterattack. They did so just in time: soon after, Night Goblins assailed them in an overwhelming tide, outnumbering the Dwarfs many thousands to one. The Dwarfs held, with war engines and crackling lightning from Thorek’s anvil reaping a terrible toll. Those greenskins that pushed onwards were met by a wall of steel that no foe could pass. In the ruined mansions of their forefathers, the Dwarfs held strong and the steep-shadowed vale of the eight peaks echoed once more to the sounds of slaughter and war chants.

Skarsnik, the leader of the Night Goblins and self-styled ‘Warlord of the Eight Peaks’, called off the ineffective attacks after a few days. Greenskin losses were in the tens of thousands, but Skarsnik knew he could afford to take such casualties daily if need be. That assault was merely a probe, and he now guessed what the Dwarfs were up to, so the shrewd Night Goblin leader began to plot a more devious attack. Nearby in the shadows, red-eyed Skaven spies saw everything, reporting news back to Queek Headtaker, the most infamous of Clan Mors’ Warlords. After many battles, Queek dominated the majority of the lower deeps of Karak Eight Peaks. There, in the underbelly of the stronghold, the Skaven had gnawed out their own massive warren. At Queek’s command, the Stormvermin shock troops massed — a thousand claws of troops awaiting the order to spearhead the attack. Soon, they would sweep the Night Goblins and the hated beard-things away in a single surge.

And so it has gone at Karak Eight Peaks for decades; Belegar and his Dwarfs withstanding plots, alliances, ambushes, super-weapons, and untold deathtraps. Three times they have been rescued by relief forces that broke through the cordon of foes to bring much-needed reinforcements, the last army led by Thorgrim himself. Belegar has sworn a mighty oath to retake Karak Eight Peaks and, inch by bloody inch, the Dwarfs have expanded their foothold. With each small gain, the engineers refortify before the inevitable counter-attack arrives. So the battle grinds on in a permanent state of siege.