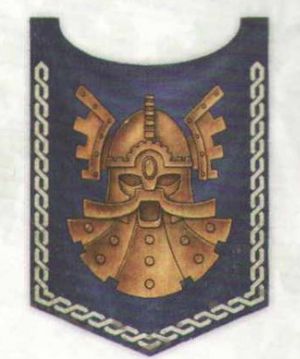 Zhufbar or Torrent Gate [5a] is a Dwarf hold located near the lost hold of Karak Varn. [1]

The hold is entrenched within a large canyon which has a large flow of water from Black Water, known to the dwarves as Drazh Varn. Water wheels in their thousands power the vast amounts of machinery for Zhufbar is rightly famous, whilst at night the light from the hundreds of furnaces make the area glow. [1a]

Created as an industrial centre, the hold also has the most important shrine for the Dwarf Engineers Guild and their Guildmaster sits on the Kings Council. Many types of machinery subsequently used throughout the dwarven empire were developed and tested at Zhufbar such as powerful pumps used to clear flooded mines. [1a]

Zhuffbar has extensive defences as it is surrounded by many tribes of Orcs and Goblins in the mountains whilst the inner part of the hold is only open to dwarves and trusted dwarf-friends. In addition to the more obvious defences, there are retractable towers, rune inscribed blast walls, iron-clad bunkers and lunch bays for the large airfleet based within. [5a]

From below Skaven clash with miners, but there is enough mineral wealth to take the risk of keeping the mines open. The rune inscribed heavy iron gates can only be opened by one of four keys – held by the King, Queen, Gatekeeper and the Guildmaster of the Engineers Guild respectively. Any greenskins that approach within 30 yards of the gate will cause runes upon it to glow red. [1a]

The hold was besieged by greenskins many times before the great purge carried out by High King Gotrek Starbreaker. [8a]

Miners find Daemons of Slaanesh and Tzeentch in the mines below the hold in -370 IC, they take no notice of the Dawrfs but focus on fighting each other, vanishing before warriors arrive. The area is sealed off as unseen Daemons can still be heard in the area. [7a]

In the year -1 IC the hold was besieged by Orcs & Goblins but following a request for aid from King Kurgan Ironbeard, Sigmar himself led his army and broke the siege allowing Alaric the Mad to rekindle the ancient forges. [2a]

Against the advice of his few remaining counsellors, Konrad von Carstein declared war on the Dwarfs, attacking outlying settlements of Zhufbar whose King marched on Sylvania. The two forces met in battle at Nachthafen and at first the dwarfs had the upper hand as their Runesmiths prevented the necromancers from using their powers. Konrad himself led an all-out attack and slew them, dispatching Walach Harkon to duel and slay the Dwarf king. All of the remaining dwarfs were slain in the next hour. [4a]

The Crimson Scourge, a mighty Hydra has plagued the surroundings of the city for more than a thousand years. [6a]