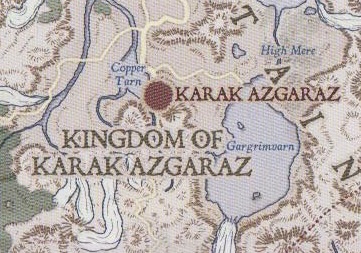 Karak Azgaraz is a powerful Dwarf hold in the Grey Mountains. [1]

Its name means Hold of the Fearless Axes. [2a][5a]

The Hold is situated within Eyrie Peak. From the hold’s great gate a traveller on the road skirts a small lake, Copper Tarn before turning west and reaching Grey Lady Pass after two days. Alternatively another two days’ north is the human town of Ubersreik while four days’ south lies the city of Parravon. A precipitous highland track leads a traveller east for two weeks, passing a handful of smaller holds before they arrive at Karak Norn.[5a]

-2000 IC (Imperial Calendar) through to -1560, the Hold is part of the bitter War of Vengeance and sees three kings fall to the High Elves, their crowns taken. [5a]

During the reign of King Bregan Firebeard or of Bregan Runefinder, men were often allies to the hold, fighting alongside them against the greenskin hordes. However after one battle, Uathach, a chieftain turned upon Thane Stronnomir and his clan and slaughtered them. Triumphant, he returned to his king bearing the head of Stronnomir proclaiming that humans would reign forever over the area. His king was greatly angered and cursed Uathach his men from the hall, bidding them to ride forever in search of war. [3a]

-1 IC, at the Battle of Black Fire Pass, King Gullin Flamemane and his Throng slay huge numbers of greenskins and settle many grudges by doing so. [5a]

In 828 IC, the High King sent emissaries to Ubersreik which had grown to a size worth watching whilst in 1221 the hold lends it aid to rebuild the town destroyed by the Skaven. [1a]

As the Black Plague sweeps through the Old World, the Karak endures and Skaven are driven from beneath the Hold. [5a]

-1522 sees the last of the Wutroth groves die, logging parties venture into Athel Lorien and are slaughtered by the Wood Elves. A grudge against them is proclaimed. [5a]

When Orcs attack Ubersreik in 1707 IC, a force is sent from the hold to break the siege but they are driven away by the greenskins who sack the town. [1a]

Magnus the Pious leads an army against Chaos in 2302 IC and is joined by King Zaladrin Strifeaxe and the Throng of Azgaraz. However whilst they are away in Kislev, Greenskins return and sack Ubersreik. Unable to assist the manlings at the time, on his return Zaladrin helps rebuild the fortifications. Later in 2318, King Zaladrin lays siege to the ruins of Blood Keep to slay a Blood Knight and his entourage gathering power there. [5a]

In 2452 Zaldrin leads the Throng to victory at the Battle of High Mere but both he and his heir are assassinated by the Goblins near the end of the battle. His son, Thuringar Orc-Hewer takes the throne. [5a]

The hold mines silver from thin and fading seams beneath the hold which they trade with the humans of the Reikland along with metalwork, furs and ale. [2a][5a]