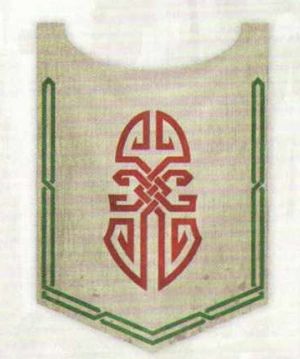 Karak Norn or Barren Earth Hold is the largest Dwarf hold in the Grey Mountains. [1][2a]

The hold was created by dwarves fleeing from the fall of Mount Silverspear and the warriors from the watchtowers that guarded Mad Dog Pass. Despite its name, it was built over large deposits of metal and semi-precious stones - the only such resource of any size in the mountain range. [1a]

The hold is well placed to provide intelligence on the elves of Lorien forest and whilst they have not posed a threat to the Dwarves in more than 4000 years, the dwarves feel that there is no harm in appropriate vigilance. The defences of Karak Norn reflect this concern, blessed with many flame cannons as well as bolt throwers but there is an uneasy truce between the two races. [1a]

Local dwarves look to the hold for leadership and although the hold is normally on good terms with Bretonnia it does side with the Empire when the two nations go to war. During such conflicts, the dwarves normally close the passes through the Grey Mountains. [1a]

The warriors of the hold often use a quartered red and white scheme for banners and shields.