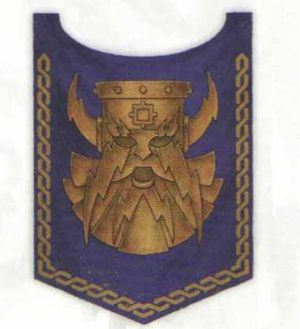 It is here that the richest deposits of iron and many other metals and minerals in the Old World can be found. Of course, the rich metal deposits have also given rise to a large metalworking community, and several of the ancient clans claim a descent from Grungni, one of the Ancestor Gods.

Karak Azul is the southernmost hold of the Dwarfs. This is presumably due to the concentration and accumulated skill and wisdom of the city’s many weaponsmiths and craftsmen. This has made Karak Azul not only a proud southern bastion of Dwarf resolve, but also a source of much fine armour and weaponry. Many great Rune weapons are crafted there thanks to the skill of one of its most famous residents, Thorek Ironbrow, and goods are carried to the rest of the Holds through hidden mountain trails and the Underway.

The first Runesmith of the Hold was Razak Forgehand. [1a]

Thane Brokk Stonefist attended a Rinkkaz shortly before the War of Vengeance who joined King Aflegard in warning of the Skaven. [2a]

King Kazador notes a grudge against the Goblins of the Red Sun tribe who are plaguing the Third Deep. A subsequent grudge is recorded against the Crooked Claw tribe, one of whom avoided his crossbow shot to gain his hundreth goblin kill of the year. In a battle against the Orcs from Black Crag 123 Dwarfs were killed fighting the invaders and new grudges were entered. [1a]

The greenskins of Black Crag, led by Gorfang Rotgut manage to sneak into the hold when King Kazador is away, first dispoiling the ale store of the Third Deep before slaughtering their way through the hold. Finally they are confronted by Kazador's son Kazrik who kills many Orcs but he and his Hammerers are overwhelmed, he has his head shaved and is nailed to his absent fathers throne, whilst his mother and 49 others are taken captive. [1a]