War of the Beard

From Warhammer - The Old World - Lexicanum
(Redirected from War of Vengeance)
Jump to: navigation, search 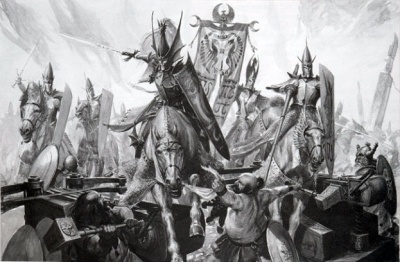 The War of the Beard, called the War of Vengeance by the Dwarfs, was a conflict more than 2000 years before the birth of Sigmar between the Dwarf Empire and the High Elves of Ulthuan and the Old World colonies, the Dwarfs led by High King Gotrek Starbreaker and the High Elves under Phoenix King Caledor II. The War devastated both races, each currently a mere shadow of their glory days before the War. [1a]

History of the War

During the reign of Caledor II of the High Elves, trade routes between Elves and Dwarfs that had been closed during the Elf Civil War were reopened, and the Elven colonies in the Old World flourished while humanity were little more than savages. Malekith, the Witch King, ordered Dark Elves dressed as High Elves to attack Dwarf traders and seize their wares. [2a]

In time King Gotrek, failing to see through the deception, demanded recompense from Ulthuan, which Caledor II - lacking the good sense and wisdom of his father, Caledor I - refused, and insulted the Dwarfs by implying that they beg. After demanding twice the original reparations for this new slight, Caledor II sent the Dwarf ambassador and his guards back with their head and chin shaved. At the same time, the Dark Elves continued to stir up trouble among the Old Word Elven colonies, and soon war began. [1a]

Even as the Dwarf Ambassador was sailing to Ulthuan, Snorri Halfhand having waited eight years for his father to act against the elves, could wait no longer. He marched on the city of Kor Vanaeth with a mighty force of 40,000 warriors from several holds including Barak Varr, Karak Hirn, Karak Varn and Zhufbar. They swiftly defeated the elf army dispatched from the city, and equally quickly stormed, sacked and destroyed Kor Vanaeth completly. The ruler of the city, Princess Liandra arrived too late on her Dragon to intervene and instead flew to Tor Alessi to warn them. [2b]

The First Siege of Tor Alessi

Tor Alessi (present-day L'Anguille in Bretonnia), an Elven colony in the Old World, was soon besieged by Dwarfen armies under King Gotrek - swearing to shave his head if he could not obtain the weregild, while the Dwarf ambassador - due to the shame of having his beard shaved - became a Trollslayer. Caledor, outraged at the assault, sent a mighty expedition from Ulthuan to relieve Tor Alessi, leaving his homeland dangerously weakened. The conflict ground on as the sides were evenly matched, the Karaks of the Dwarfs and Ulthuan of the High Elves proving unassailable, with the Dwarfs resorting to burning down virgin forests just to spite the High Elves as the Old World was awash with combat. [1a]

Brok Stonefist, head of the Dwarf force of Karak Azgul with centuries of experience with the Dwarf network of tunnels, earned great fame by rallying the shattered force of Karak Azgul and routing a High Elf army by using his prescient knowledge of the tunnel network. For this feat he was named Ungdrin Ankor Rik, or 'Lord of the Tunnels' by the Dwarfs, and Arhain-tosaith, 'shadowy one of the earth' by the High Elves. However, he was soon to meet his nemesis Lord Salendor of Tor Achare, for which he was evenly matched. For the next hundred years they would clash, in such battles as the Battle of Blind River. However the bloody conclusion would be the Battle of Athel Maraya. After fighting inch-for-inch for the doomed city of Athel Maraya, Dwarfs set fire to the city. As both High Elves and Dwarfs fled the burning city, Brok and Salendor - unwilling to flee or heed the warnings of their comrades - fought to the death among the inferno, and are said by the Elves to haunt the city millenia later, locked in eternal combat.[1b]

The Fall of Caledor II

Caledor II, having slain Prince Snorri Halfhand, son of King Gotrek, was growing frustrated with the protracted nature of the War, dismissed his generals and later charged the Dwarf infantry during the Fourteenth Siege of Tor Alessi, only to be slain by King Gotrek, who seized the Phoenix Crown and retreated to Karaz-a-Karak. Shortly before beginning a suicidal siege of Karaz-a-Karak, the Dark Elves struck at Ulthuan, forcing the High Elves to remove their forces from the Old World and fend off the Dark Elves, thus ending the War of the Beard. [1a]

Due to the recent Dark Elf attacks, and depletion of the High Elf military due to the War of the Beard, Caledor's successor, Caradryel ordered the evacuation of all remaining High Elves - both civilian and soldier - from the ravaged Old World colonies, warning those that remained they would not be protected by Ulthuan. Though many left, those that felt they had little loyalty to Ulthuan remained and travelled to the Forest of Loren for protection, and became the Wood Elves. The Dwarfs, though victorious, were left dangerously weakened, and unable to successfully combat Greenskin and Skaven incursions. Both races were much weakened by the War, and are but shadows of their former selves, and left a lingering bitterness between them.