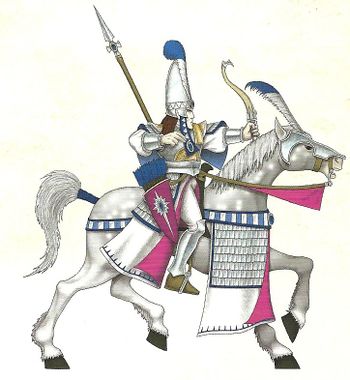 An Ellyrian Reaver. [3a]

Ellyrian Reavers are a type of light, fast cavalry notably raised from the High Elf province of Ellyrion. They are also known as Reaver Knights. [4a]

They are amongst the best horsemen of Elven kind and ride ahead of the Phoenix King's armies, serving as scouts as well.[1b] Reavers utilise both bows and spears from atop their mounts to harass enemy formations and attack swiftly from the flanks of foes.

They ride out from their city of Tor Elyr and patrol their homeland's coasts, keeping watch for potential invaders such as Dark Elves and Norse Marauders. In a similar fashion they keep a lookout for any monstrous beasts such as Chimeras. [2a] In particular Dark Elves seek to steal night balck horses, killing those of any other colour, so the steppes must constantly patrolled. [3a]

After a battle or hunt, the warrior who has killed the most opponents are named are granted the honour of carrying the regimental banner, whilst the one who has slain the most powerful enemy is granted the title as Harbinger of Kurnous. [6a]

When Caledor I sought to unite his waring kingdom and messengers were being killed he called for brave horsemen to carry ride the troubled land and carry his words throughout. Those who answered the call lived off the land as they rode across Ulthuan and became known as Reaver Knights. Following this, they patrolled the shore and countryside receiving honours from the Phoenix King, a role they still carry out. [2a] [4a]

They trail banners that their steeds are trailed to recognise and group with should their riders be slain. [3a]