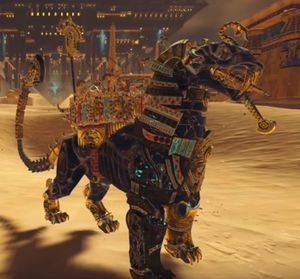 Warsphinx is a terrifying creation of Tomb Kings: a huge leonine statue carrying a great howdah on its back. [1a]

They were first created to guard the entrances to the king's inner sanctums, standing as huge sentries at each pyramid or prowling about, ready to devour intruders. Some, even more lavishly embelished stood sentry over the rulers sarcophagi itself. [1a]

After the awakening of the Tomb Kings, many would ride them to battle. [1a]

It is rare for a new Sphinx to be constructed, and those destroyed are painstackingly retreived and restored by the Necrotects. [1a]

The howdah on the back can be crewed by the lucky Tomb Guard; it is very rare, however, to see a Tomb King who would not want this creation for himself,, for not only is it truly devastating in combat, but being made out of solid stone, hardly anything can hope to do real damage to this monstrosity.

Few warriors are brave enough to stand their ground in front of this monster, for those who are get swatted aside by its claws or snapped in half by the giant jaws. The full power of the Warsphinx, however, lies in its ability to literally crush the enemy under its massive body, leaving nothing by bloody pulp beneath.[1a]

Each Warsphinx is unique and there are many variations in weaponary - some can breathe fire whilst others have tails resembling those of the scorpion, filled with venom. [1a]