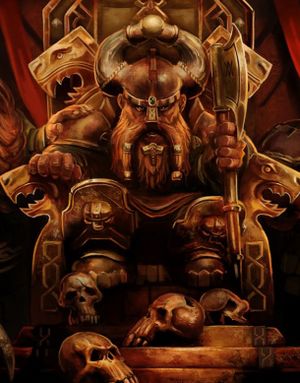 He is married to Queen Karelia Amberhair with his heir, Prince Ulther tasked with overseeing the trophy room, guard rooms, hammerers’ barracks, and royal armouries of the holds Royal Deep. [1a]

He took the throne in 2452 IC when his father and elder brother were killed by Goblin Assassins. [1a]

In 2475 IC after successful peace negotiations between Ubersreik and Parravon create a buffer zone between them, Thuringar takes the eastern part of the territory to establish the Azgaraz Trading Post. [1a]

Agressive, daring and very young compared to most Dwarf kings, King Thuringar is however mindful of the elders’ influence, and listens to their advice when considering his own inclinations but knows that his boldness has won him great support among the younger warriors. [1a]

His mother, the powerful Grand Matriarch of the hold and a strong member of his council has been known to admonish the king when she believes it necessary. [1a]