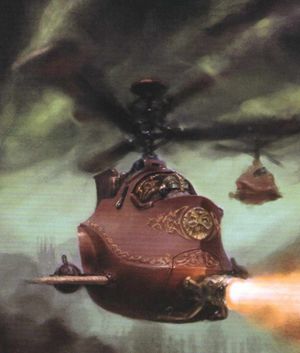 Gyrocopters are Dwarf flying machines whose rotor blades are propelled by an ingenious lightweight steam engine. [2a]

As they have such a high cost of maintenance this is normally funded by the crown and so they are also known as the King's Flying Corps. [1a]

These devices can take off and land vertically or even hover on the spot. Gyrocopters were invented by the Dwarf Engineers Guild and are flown by members of the guild. It is easy to see why Dwarfs invented these machines when you consider their high mountain realm. The inventor was probably inspired by watching dragons swooping down from mountain crags and combined the idea of wings with that of engines used to drive drilling machines and flywheels from grinding machines! Gyrocopters can take off and land easily amid the peaks, as the lofty pinnacles make excellent landing points.[2a]

Gyrocopters enable Dwarf strongholds to keep in contact by flying directly over the difficult mountain passes which may be infested with enemies. Supplies and messages can be dropped from a Gyrocopter directly onto a beleaguered Dwarf settlement, enabling them to hold out for longer and send word for help. In battle, Gyrocopters provide Dwarf armies with the speed and ability to strike anywhere that they lack since they do not use mounted troops.[1a]

In the past some - potentially mad - members of the Engineers Guild invented a Gyro Multiseater, to carry more than one Dwarf into the sky at time, but this creation did not become popular among the Society of the Dwarfs.